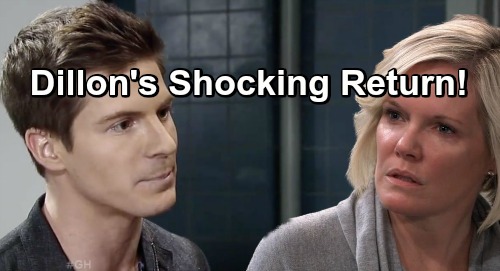 General Hospital (GH) spoilers tease that Ava (Maura West) will do her best to keep her head above water. She feels like she’s drowning in grief right now, but “Kevin” aka Ryan (Jon Lindstrom) has promised to support her. He’s doting on Ava and making her feel like his priority, which is something she’s not used to experiencing. That’ll bring these two even closer in the coming weeks.

However, “Kevin” still has to work and keep up his usual Dr. Collins charade. He’d rather spend all his time with Ava, but this is important if he wants to keep his new life intact. Ryan is undoubtedly loving the opportunity to run amok and not face even a hint of suspicion. Who would think kind “Kevin” could be capable of these murders? Ryan’s got a free pass to wreak havoc as long as he’s careful!

As for Ava, she’ll struggle in those moments she’s alone. There’s a good chance Ava will throw back plenty of vodka as she dwells on Kiki’s (Hayley Erin) demise. Ava doesn’t like how she left things with Kiki one bit. She squandered precious months away letting the distance grow between them. Now it’s too late to make amends.

There’s another GH character who could be in the same boat as Ava. General Hospital fans will recall that Dillon (Robert Palmer Watkins) and Kiki’s relationship didn’t end on great terms. They tried the whole long-distance thing, but Dillon kept brushing Kiki off. Another woman eventually answered Dillon’s cell phone and that’s when Kiki knew for sure they were done.

Will Dillon harbor any guilt over Kiki’s devastation now? Will he feel bad about throwing away what they shared? It’s doubtful that Ms. Phone-Answerer actually became a lasting girlfriend. Dillon’s probably been working his way through chick after chick in California when he could’ve had a sweet girl who cared about him in Port Charles.

On December 12, General Hospital spoilers say a visitor will bring quite a shock. Ava will be taken aback when someone surprising shows up at her door. This could certainly be somebody like Carly (Laura Wright) or Laura (Genie Francis), but a truly stunning option would be Dillon. It might be a nice idea for Ava and Dillon to discuss their regrets. They could be on the same page about their remorse.

I hope someone tells Dillon @Robertpwatkins about Kiki @HayleyErin No matter what happened between them, they did love each other at one point #gh @GeneralHospital pic.twitter.com/C7og08Nmwx