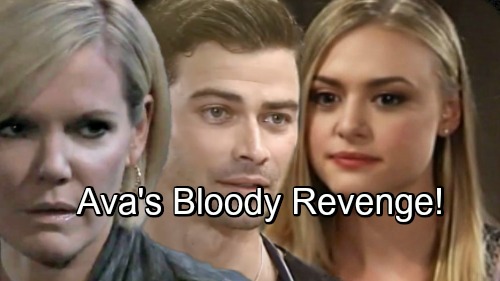 General Hospital (GH) spoilers tease that Ava’s (Maura West) revenge could kick into high gear. She’s already put several vengeful plots in motion, but that’s certainly not enough for this ruthless character. Ava’s the kind of gal who wants people to truly pay. Make an enemy out of her and you could suffer forever!

Griffin (Matt Cohen) and Kiki (Hayley Erin) made mistakes, but they don’t believe they deserve this level of vengeance. Ava got Griffin suspended from his job at GH, so he’s feeling adrift at the moment. Kiki’s struggling to keep her spot in Avery’s (Ava and Grace Scarola) life and dealing with the loss of her mom. Ava might as well be dead to her after all this, so Kiki’s undoubtedly hurting deep down.

General Hospital spoilers say Kiki and Griffin will bond over their pain. When they bumped into each other at the park, Kiki did her best to keep their friendship alive. The pair agreed to start running together soon. Kiki even mentioned that an apartment was available in her building. It led to some awkwardness and suggested that this romance was moving full-speed ahead.

Naturally, Griffin and Kiki’s budding relationship will only make matters worse with Ava. They’ll provoke her even further and set themselves up for major trouble. Ava clearly hates Kiki for what she did, but it seems like Griffin could be poised for the most damage. After all, he’s the one who was in a romance with Ava.

They technically weren’t an item on the night of the hookup, but Ava doesn’t care about that. She’ll continue to view this as a betrayal, so Griffin had better watch out. He thinks he has a little leverage since he knows Ava worked with Nelle (Chloe Lanier), but there’s no real proof of that. Ava’s still in control here.

General Hospital may have dropped a hint about some deadly drama. Julian joked about Ava potentially killing Griffin, but she suggested she couldn’t do it alone. Since Julian knows how Ava can be, he had to pipe up that killing Griffin wasn’t the answer. It’s tough to believe Ava would resort to flat-out murder in this case, but her revenge plan could still take a dangerous turn.

Will Ava do something that leaves Griffin’s life on the line? No one would be surprised. When it comes to Ava, nothing is off-limits. Characters like her can really go too far as GH fans have seen before! Ava could easily create a situation that leaves Griffin in harm’s way. He could end up in a fight for his life, which might pull Kiki closer. She could realize how much Griffin means to her and push for a relationship after he recovers.