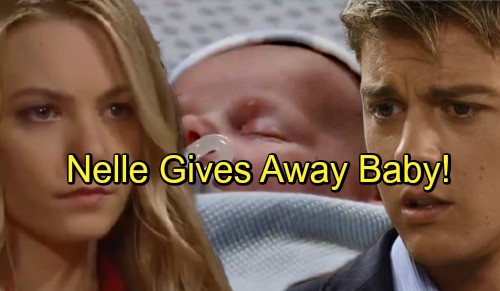 General Hospital (GH) spoilers tease that Brad (Parry Shen) and Lucas’ (Ryan Carnes) bliss may be brief. GH must have some big baby plot coming up. Maxie (Kirsten Storms) had a rough time giving birth, but things went just fine after the delivery. That makes it even more likely that trouble’s looming for both Brad’s kid and Nelle’s (Chloe Lanier).

Of course, we’ve got other evidence as well. From the get-go, Brad and Nelle’s friendship seemed strange. General Hospital never really offered an explanation for how they knew each other. They were just suddenly hugging and catching up at Kelly’s. That seems suspicious if you ask us! GH clearly needed these two to be in each other’s orbit for the brewing baby drama.

General Hospital has also been offering major anvils along the way. Consider what Lucas and Brad have been terrified about. They’re so afraid the birth mom will change her mind and take back their baby boy. Brad and Lucas hate the thought of growing attached to the kid only to give him up.

Now that Brad’s bonding with Wiley, it’ll really rev up the pain if this new dad’s fears come true. A baby swap could still happen if Wiley has health issues and ends up back at GH. However, the show may have another plan in mind.

Again, they’ve definitely been giving us plenty of “birth mom will take back the baby” hints. Brad and Lucas may be heartbroken when the mother just can’t give him up. They may have to say some tearful goodbyes and hand little Wiley over.

Meanwhile, Nelle’s baby will be born into chaos. Chase got her Zach confession on tape, so Nelle’s going down if that recording survives the crash. General Hospital spoilers say Nelle will do some taunting on August 7. What if she takes this opportunity to drop a paternity bomb? If there was some test results trickery, Michael may not be this baby’s father after all.

Nelle may realize she’s been caught, so there’d be no point in keeping up the charade. If she’s carted off to prison, what happens to the baby? Nelle seemed to genuinely like Brad as a pal. Could he deliver a heartfelt plea? Will Brad ask Nelle to let him adopt the baby and raise him or her with Lucas?

Nelle could land in the slammer and she’s not cut out to be a mom anyway. Perhaps she’ll actually do a good deed before she exits. Nelle could never be fully redeemed, but she might show she has a teeny-tiny piece of a heart.

Do you think Brad and Lucas will end up with Nelle’s baby? We’ll give you updates as other GH news comes in. Stay tuned to the ABC soap and don’t forget to check CDL often for the latest General Hospital spoilers, updates and news.