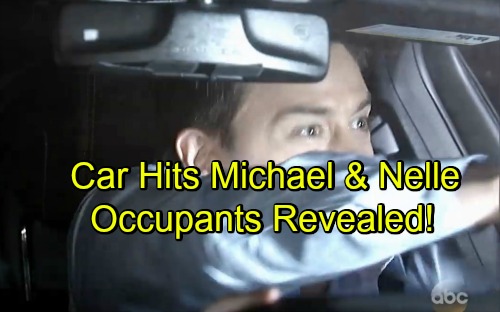 General Hospital (GH) spoilers tease that Josslyn Jacks (Eden McCoy) will panic over some crushing news. She’ll find out her only remaining brother, Michael (Chad Duell), has been seriously injured in a car accident. Of course, Joss will be concerned about Nelle (Chloe Lanier) as well. At this point, she still considers Nelle a good friend.

To make matters worse, there’ll be familiar faces in the car that hit Michael and Nelle. Could Cameron Spencer (Cade McWatt) and Oscar Nero (Garren Stitt) be inside? Their moms will have a chat at GH in Monday’s new episode, July 30. Liz Webber (Rebecca Herbst) and Kim Nero (Tamara Braun) may be in for a shock soon after. They may learn their teenage boys caused a crash and were potentially injured.

As for Joss, she’s already been under plenty of stress lately. Carly Corinthos’ (Laura Wright) Ferncliff ordeal has really taken a toll on her. Josslyn misses her mom and is understandably worried about her future. Once GH piles an accident on top of all that, it’ll certainly push Joss over the edge.

General Hospital spoilers say Josslyn’s fury will erupt this week, July 30 – August 3. There could be a couple reasons why. If Sonny Corinthos (Maurice Benard) fills Joss in on Nelle’s guilt, that’d give her a big reason to blow up. However, Josslyn could also blast Cameron if he was the one driving the swerving vehicle. He might have only minor injuries, so she probably wouldn’t have much sympathy.

Then again, Cam might’ve convinced Oscar to get behind the wheel. This could cause another hurdle in Joss and Oscar’s already struggling relationship. Whatever the case, Josslyn will have a lot to worry about. General Hospital spoilers say Joss will have a hard time finding support. Everyone she normally turns to should be injured, preoccupied or on her bad side.

Josslyn already did a bit of shoplifting not too long ago. She may continue down this dangerous path after the accident. Josslyn could easily crack under the pressure and act out in unpredictable ways. We’ll give you updates as other GH details emerge. Stay tuned to the ABC soap and don’t forget to check CDL often for the latest General Hospital spoilers, updates and news.