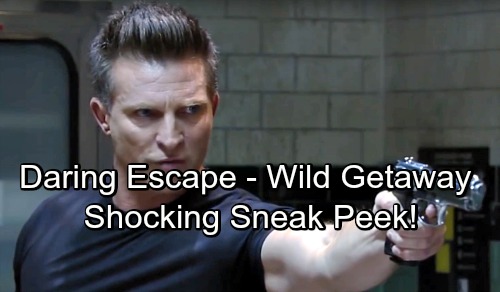 General Hospital (GH) spoilers tease that major Ferncliff drama is brewing. Monday’s sneak peek video offers a glimpse of all the action. Jason (Steve Burton) just burst in and pulled a gun on Dr. Lasaris (Casey Biggs). He’ll start barking orders in Monday’s episode, so the doc will know he needs to cooperate.

Jason will put a stop to Carly’s (Laura Wright) electroconvulsive therapy. He’ll insist that Dr. Lasaris needs to turn that machine off right now. Once Dr. Lasaris gets over the shock of the situation, he’ll obey Jason’s commands. Dr. Lasaris will shut everything down and look to Jason for more instructions. He’ll quickly be told to get on the floor.

Jason will want the nearby orderly to join Dr. Lasaris down there. He won’t want them to hinder what he has planned. General Hospital spoilers say Dr. Lasaris and the orderly will be tied up. After Jason’s sure that they’re restrained, he’ll take Carly’s mouthguard out and offer reassurance.

Carly’s on plenty of drugs, so she’s been hallucinating. She won’t even be sure that Jason’s real. Nevertheless, Jason will grab Carly’s hand and let her know he’s really there for her. He’ll encourage Carlry to get up off the table and try to walk.

Carly won’t think she can stand, but Jason will push her to make this happen. If Carly wants to escape, this is the only strategy. Carly will gather up her strength and hobble over with Jason’s help. As they head for the door, Dr. Lasaris will call out a warning. He’ll insist that they won’t get very far like that. The doc will believe Jason and Carly are going to get caught on the way out.

General Hospital spoilers state that Jason will pause nervously. He won’t be sure what to do next. Will Jason hide out with Carly until he can call for backup? We know he’ll reach out to Sam (Kelly Monaco) soon. She’ll stop by Ferncliff with Curtis (Donnell Turner), so maybe they can create a diversion.

As for Franco (Roger Howarth), GH spoilers say he’ll get tired of waiting outside. Franco’s in the getaway car, but he may end up taking off without Jason and Carly. He won’t want to risk going to prison and putting his life with Liz (Rebecca Herbst) in jeopardy.

If Franco indeed peels out, it may be a good decision. There’s been a car crash with several victims, so Franco may be able to pitch in. We’ll give you updates as other GH news comes in. Stay tuned to the ABC soap and don’t forget to check CDL often for the latest General Hospital spoilers, updates and news.