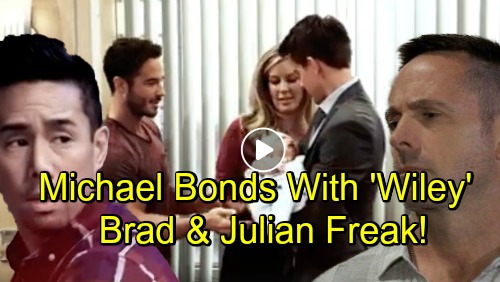 General Hospital (GH) spoilers tease that Michael (Chad Duell) will spend some time with “Wiley.” He may think it’s the one good piece of advice he’s received from Nelle (Chloe Lanier). In her recent letter, Nelle suggested that Michael should take comfort in Lucas (Ryan Carnes) and Brad’s (Parry Shen) son. When Michael runs into Lucas this week, he’ll take advantage of some baby bonding.

Michael will hold “Wiley” and undoubtedly battle more grief. He’ll wish he could be cuddling his own son, but he won’t know that he actually is! Thanks to Brad and Nelle’s baby swap, Jonah is currently being raised by “Brucas.” Since Lucas has no idea, he’ll gladly hand “Wiley” over and try to help Michael in any way he can.

If Michael’s OK with it, Lucas may even suggest that he could babysit when he’s ready. He certainly won’t want Michael to push himself too hard, but this could help him cope. General Hospital spoilers hint that Michael and “Wiley’s” bond will grow stronger. It looks like he’ll feel more and more drawn to the boy, so Brad’s sure to get nervous.

Julian’s (William deVry) in the dark on the Jonah part of the story, but he’ll be worried, too. On September 25, Julian will give Brad a stern warning. He might think it’s best not to let anyone get too close to the situation, including Michael. Keeping people at a distance is the ideal strategy right now.

Of course, Brad will struggle to do that as Lucas questions his hesitance. Carly (Laura Wright) will also have some questions next week, so Brad could face suspicions from every angle. Will he crack under the pressure and make another confession to Julian?

It’d be interesting for Julian to find out about Nelle’s involvement eventually. He’s already caught in a major war with Sonny (Maurice Benard), so GH might as well up the ante. Regardless, General Hospital spoilers say Julian will deal with some frustration. Perhaps he’ll start to believe Brad isn’t giving him all the facts.

Brad’s tight spot is getting tighter, so don’t miss the rest of this drama-filled storyline. We’ll give you updates as other GH news comes in. Stay tuned to the ABC soap and don’t forget to check CDL often for the latest General Hospital spoilers, updates and news.