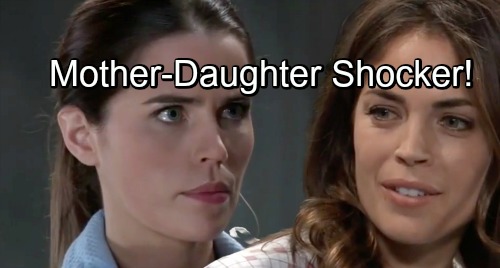 General Hospital (GH) spoilers tease that Britt (Kelly Thiebaud) will head to GH for an important exam. She’ll seem fine, but Finn (Michael Easton) will argue that trouble could be brewing. It’s possible there’s some medical issue he needs to keep an eye on.

Of course, it’s also possible Finn will joke about Britt being a target. She won’t stay healthy for long if her enemies go too far! General Hospital already has a dying Oscar (Garren Stitt) storyline, so Britt’s probably not in a life-threatening situation. The real point of this GH visit is most likely to set up something else.

We should note that the timing of Britt’s return is suspicious. She showed up just before Sasha (Sofia Mattsson) and Valentin’s (James Patrick Stuart) scheme was revealed. Since Sasha isn’t Nina’s (Michelle Stafford) daughter, whose daughter is she? Perhaps Britt secretly gave birth to Sasha as a teen or kept quiet about another kid of Liesl’s (Kathleen Gati).

Regardless, General Hospital made a real statement with their casting choice. Sasha looks just like a younger version of Britt, so there has to be a close connection. It makes sense that Sasha would be Britt’s daughter or younger sis. That’d also explain the DNA matches Curtis (Donnell Turner) came up with. Those things can be tricky when other relatives enter the picture.

Since Britt’s getting a checkup at GH, it opens the door for a revelation later. General Hospital fans will recall how Peter (Wes Ramsey) requested a test for Huntington’s disease. That led to Griffin’s (Matt Cohen) illegal DNA test and the discovery that Peter was Faison’s (Anders Hove) son.

Thankfully, Britt was already tested for Huntington’s and the results came back negative. However, GH could still take a similar story route. Finn could uncover some inherited medical problem that would come into play for Sasha eventually.

Then again, this could just be about having Britt’s file and DNA handy. If Sasha lands at GH down the road, their files may be compared for some reason. At some point, General Hospital spoilers say Finn’s plot with Anna (Finola Hughes) will take an unethical turn. Could he take a page out of Griffin’s playbook and order a DNA test illegally?

One way or another, Britt and Sasha’s storylines are probably going to collide. General Hospital viewers won’t want to miss the bombshells ahead. We’ll give you updates as other GH news comes in. Stick with the ABC soap and don’t forget to check CDL often for the latest General Hospital spoilers, updates and news.