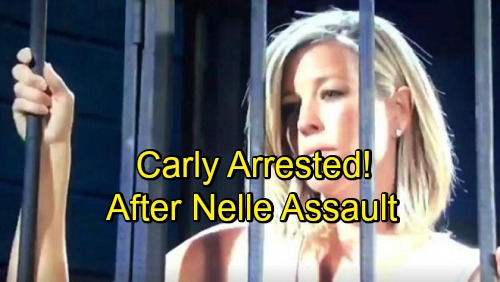 General Hospital (GH) spoilers tease that tragedy will strike at Nelle’s (Chloe Lanier) baby shower. GH fans can expect Nelle to move forward with the next phase of her plot. She’ll hope to send Carly (Laura Wright) off the deep end, but she’ll be the one who takes a huge fall. Nelle will find herself stuck in an intense showdown with her enemy. Unfortunately, it’ll bring a real disaster!

Whenever someone’s pregnant on a daytime drama, it’s usually best to steer clear of staircases. Of course, expectant soap mothers never seem to learn. General Hospital spoilers suggest that Carly may corner Nelle around the stairs. She might shove Nelle if she’s out of her mind in that moment. After all, Nelle’s planted gifts will surely leave Carly shaken up. 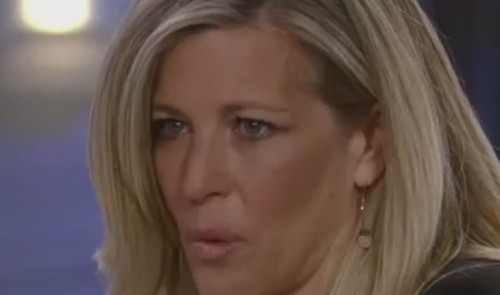 However, there’s a good chance Carly will simply get in Nelle’s face and start ranting. She may lunge forward until Nelle backs off the edge of the top step. GH viewers will see a horrible fall for Nelle, so she’ll undoubtedly be rushed to the hospital. Whether her baby makes it or not, Carly will have to deal with the consequences of this fierce fight.

For starters, Michael (Chad Duell) will be horrified. He’ll probably lash out at his mother for putting both Nelle and the baby in peril. When he gets updates on Carly’s actions, he’ll definitely have concerns about her sanity. Still, that may not stop Michael from seeing red. His fears will likely bring rage initially, so Carly had better be prepared. 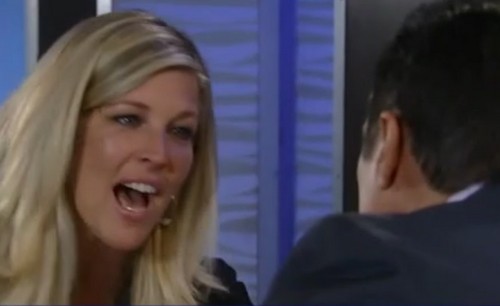 Sonny (Maurice Benard) will certainly take this as proof that Carly’s unwell. Josslyn’s (Eden McCoy) sure to be upset, too. Plus, there’ll be a bunch of party guests who witnessed the chaos. Nelle’s plan will work, but she didn’t count on her baby being collateral damage. You can bet she’ll press charges over Carly’s attack.

General Hospital spoilers say Carly will be arrested soon, so that shocker’s worth tuning in for. Since we know she’ll land in a mental institution down the road, perhaps a judge will force Carly into that situation as an alternative to jail for assaulting Nelle. We’ll keep you posted as other GH news comes in. Stick with the ABC soap and don’t forget to check CDL often for the latest General Hospital spoilers, updates and news.