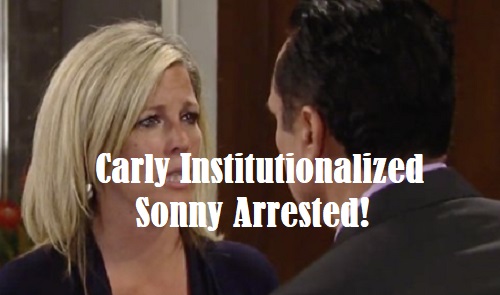 General Hospital (GH) spoilers tease that Michael’s (Chad Duell) got a whole lot of chaos headed his way. For starters, Nelle’s (Chloe Lanier) working on a plot to bring down Michael’s mother. Carly (Laura Wright) is already starting to go off the deep end – or at least that’s how Sonny (Maurice Benard) feels. It looks like Carly might end up in a psychiatric facility before long.

However, Nelle could gain some advantages she didn’t expect. On top of the Carly drama, Michael’s dealing with his grandfather’s Alzheimer’s. General Hospital spoilers say Mike’s (Max Gail) condition will grow much worse over the next couple weeks. That’ll hit Sonny hard and leave Michael concerned.

Nelle had no idea Mike would show up with such a devastating illness, but it’ll work in her favor. That’ll give Michael one more reason to lean on his ex. Of course, there could be yet another reason thanks to GH’s “field in Croton” plot. Mike seems poised to blab about Sonny disposing of a body there.

General Hospital spoilers state that Detective Chase (Josh Swickard) will begin poking around. Sonny won’t be happy about that, especially since Mike’s got loose lips these days. Since Mike appears to feel guilty about what he knows, that could lead to a confession. He may mention the field in Croton during a conversation with Chase. That could spark more digging and perhaps serious charges.

Will Sonny go to prison over what Mike spills? If so, that could really send Michael into a tailspin. Let’s recap the situation here. Michael’s mom could end up in a mental institution and his dad might land behind bars. That’d leave Michael to care for Mike, who will obviously decline to the point of death down the road.

Michael may have a string of horrible losses ahead, so Nelle could step right up to comfort him. She would undoubtedly be there for Josslyn (Eden McCoy) as well, which will earn her even more points. Nelle could be on the verge of getting everything she wants. Michael may reunite with Nelle if she proves to be a great friend during crisis after crisis. Their love could bloom once again.

When you add a baby they both adore to the mix, that’d really seal the deal. Plus, Carly and Sonny wouldn’t be around to meddle. All Nelle would have to do is keep her Carly scheme a secret and she’d be all set for the future.

Alas, Nelle’s not the best secret-keeper. The harder she tries to bury her evil plots, the quicker they come back to haunt her. General Hospital writers may give Nelle all she desires, but her perfect world will fall apart eventually! We’ll give you updates as other GH news comes in. Stick with the ABC soap and don’t forget to check CDL often for the latest General Hospital spoilers, updates and news.