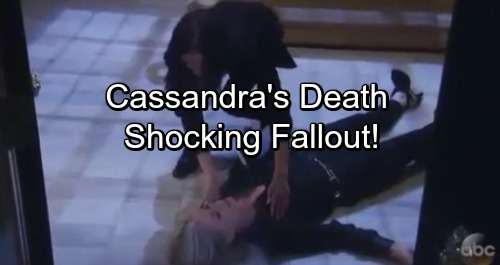 General Hospital (GH) spoilers tease that Anna (Finola), Finn (Michael Easton) and Valentin’s (James Patrick Stuart) latest scheme is finally over, but the fallout is just beginning. For starters, we should talk about Cassandra’s (Jessica Tuck) fate. She looked awfully dead after Finn jabbed that syringe in her chest.

It’s quite fitting if Cassandra died in the same manner as most of her victims. Cassandra’s played a role in many overdoses, so this would be the ultimate justice. Even if Cassandra makes it to GH for treatment, that doesn’t mean she’ll get out of this mess alive.

General Hospital spoilers say Anna will visit an ICU patient on Thursday. Wednesday’s preview video shows Anna speaking with Finn at the hospital, so that may be the visit referred to in the next day’s spoilers. However, it’s also possible Anna will sneak in Cassandra’s room and finish the job. No one would blame Anna after what Cassandra did to Finn! She won’t allow Cassandra to get Finn hooked on drugs again.

Nevertheless, Cassandra seemed lifeless on the floor. She may be leaving Anna’s house in a body bag. Regardless, death appears to be the exit GH has chosen for Cassandra. It was self-defense, but the investigation could still bring problems for Finn.

Plus, Cassandra nearly overdosed the good doc. Finn may be tempted to fall back into old habits after this. That’s certainly the goal Cassandra had in mind. General Hospital spoilers say Anna will have to step up and get Finn through his struggles. She’ll explain his role in the plot to Jordan (Vinessa Antoine) and try to keep Finn clean.

Does Cassandra have any vengeful friends or family members that might come forward? That could be a concern, but Anna and Finn will hope this is truly over. While Finn recovers, Anna can devote any extra time to all the twin mysteries.

Perhaps Anna can help Jason (Steve Burton) and Sonny (Maurice Benard) sort through some of the latest clues. They need to find Faison (Anders Hove), determine who the traitor is and learn more about the manuscript. Drew’s (Billy Miller) memories are still floating around Port Charles somewhere as well.

Anna will discover some shocking proof soon. As for Valentin, he’ll cling to his loved ones. Nina (Michelle Stafford) won’t be happy once Valentin fills her in on the details, so he may make a promise to stay out of trouble. Of course, that’s a promise Valentin can’t keep. It won’t be long until additional drama hits for the sneaky Cassadine.

Are you glad this storyline’s wrapping up or were you enjoying Cassandra’s mayhem? Will you miss Jessica Tuck as this sassy character? We’ll give you updates as other news comes in. Stick with ABC’s GH and don’t forget to check CDL often for the latest General Hospital spoilers, updates and news.