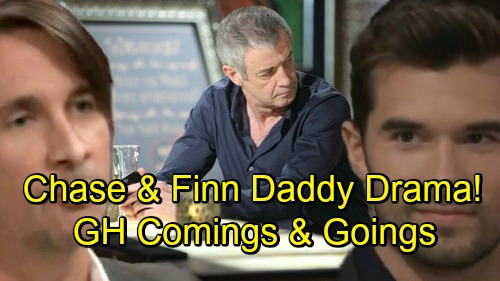 General Hospital (GH) spoilers tease that we’ve got some comings and goings news to pass along. First, let’s talk about a recent debut. You might be wondering who played the bodyguard who ran into a bit of trouble with Curtis (Donnell Turner). Travis Andre Ross appeared in the role on Friday, September 14.

Valentin (James Patrick Stuart) hired this bodyguard to watch Nina since Cassandra (Jessica Tuck) is still out there somewhere. It looks like Ross’ run has wrapped, but his popup character provided some good drama. Next, we should talk about some familiar faces. Several characters are returning to GH in the near future.

General Hospital spoilers say Robin (Kimberly McCullough) will continue her latest stint this week, September 17-21. She recently made amends with Anna (Finola Hughes) and spent some time catching up with Maxie (Kirsten Storms). Robin eventually had a conversation with Peter (Wes Ramsey) as well, but it’ll be Jason’s (Steve Burton) turn on Monday, September 17.

Other General Hospital spoilers say James Read will reprise the role of Gregory Chase. He was last seen back in June, when he ran into Finn (Michael Easton) out of the blue. This time it looks like Gregory will visit with a goal in mind. He’ll show up this week, so Chase (Josh Swickard) and Finn should be thrown for a loop.

Of course, Finn should be the one who’s uncomfortable. Chase doesn’t have the same beef with their father, so maybe he’ll try to bring Finn and Gregory together. It’s clear that Chase would like to have some strong family bonds. He’s been making real progress with Finn, so let’s hope Gregory’s arrival doesn’t blow it.

Even if Finn and Chase face a setback or two, they shouldn’t give up. They have a chance to grow closer and become true brothers. In fact, they may need each other more than ever down the road. Word has it a family crisis may force them to reevaluate their connection as well as the past.