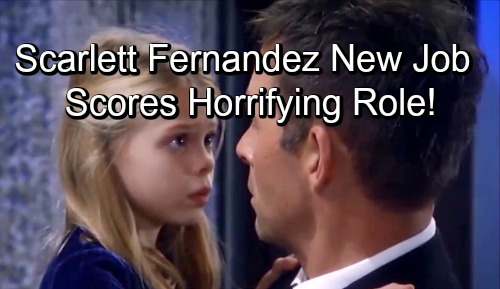 General Hospital (GH) spoilers are pleased to report that Scarlett Fernandez, who portrays Charlotte Cassadine on the ABC soap, has an exciting (and scary!) new prime time role. We’re used to seeing Scarlett portraying a normal kid doing normal kid things, but this new role is likely to be very different from Charlotte Cassadine.

Scarlett will make a guest appearance on the series, but there’s no word yet on exactly which part she’ll be portraying. However, it’s bound to be a spooky role! American Horror Story is typically a fright fest and often features unpredictable and ruthless characters. It will be fun to see how Scarlett’s character will fit into the dark and scary subject matter.

The story for season 8 takes place after a nuclear apocalypse has occurred. A mysterious cooperative runs several secure “outposts,” where the world’s chosen elite live. The series focuses on Outpost Three, which is run with an iron fist by its rulers, until a new arrival to the outpost throws their order into chaos.

You can catch Scarlett’s guest appearance on the 6th episode of American Horror Story: Apocalypse, which is scheduled to air on FX on October 17, 2018. This particular episode will be directed by the series’ star, Sarah Paulson, so Scarlett will get to be directed by a veteran primetime actress.

Are you excited to see Scarlett in a totally different role from Charlotte Cassadine? Stay tuned to the ABC soap and don’t forget to check CDL often for the latest General Hospital spoilers, updates, and news.