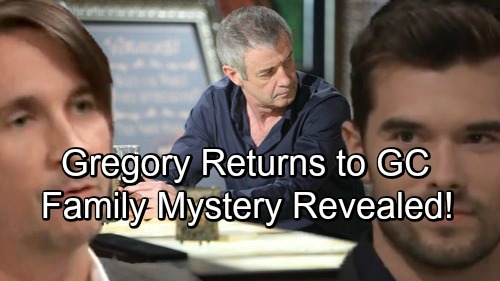 General Hospital (GH) spoilers tease that a familiar face will pop up again. Back in June, James Read (ex-Clyde on Days of Our Lives) debuted as GH’s Gregory Chase. Finn (Michael Easton) and Chase’s (Josh Swickard) father made a brief appearance, but the story fizzled after that. Gregory was supposed to visit Chase on his birthday, but his plans ultimately fell through.

It almost felt like General Hospital made some last-minute writing changes and decided to hold off on this storyline. Regardless, the weird delay left us hanging on what really happened between Gregory and Finn. Viewers obviously aren’t getting the full picture of why they’re estranged, but more info’s on the way.

GH will pick this plot up again in the coming weeks, so the new developments should be interesting. Let’s recap what we know so far. After Finn’s mother died, he was upset by how fast Gregory moved on. Gregory married again rather quickly and had Chase with his new wife soon after. Finn claims he kept Chase at a distance because letting his half-brother in would mean letting Gregory back in, too.

Fortunately, Finn seems to have changed his mind. He’s now open to the idea of bonding with Chase, so they’ve been sharing some sweet moments. However, it looks like Finn will end up being right. Since General Hospital spoilers say Gregory is returning, that means Finn will get sucked back in. Being close to Chase will indeed mean being in Gregory’s orbit and dealing with the drama.

This fall will bring an incident that Chase and Finn never saw coming. They’ll go through something they didn’t expect, but what is it? General Hospital spoilers say it’ll involve their father and will eventually bring them even closer. It’ll also add to the mystery of why Finn wanted to shut Gregory out completely.

GH has the illness angle covered with Oscar (Garren Stitt), so this might be something else. Gregory could have an accident or face a brutal attack. He might even pass away suddenly. This could lead to some deeper conversations about buried secrets. Perhaps it would also bring out some old documents that could explain more.

It’s possible Gregory stole Finn’s girlfriend and that’s why there’s always been so much tension. There’s even a chance Chase is Finn’s son instead of his little bro. Of course, the secret could be something tamer instead. There might just be a worse falling out that fans aren’t clear on yet.