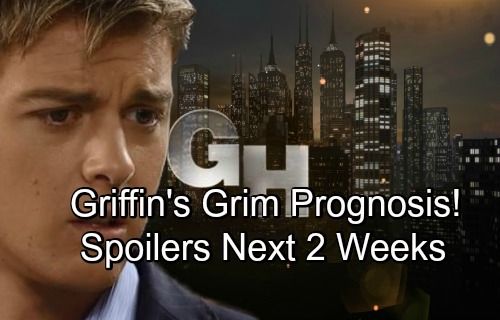 Afterward, Chase will be thankful. He’ll most likely learn that Nelle and her baby are going to be OK. As for Michael (Chad Duell), he probably won’t be out of the woods yet. General Hospital spoilers say Griffin (Matt Cohen) will express concern this week. Ava (Maura West) will make a phone call soon after, so she may want to let Kiki (Haley Erin) know what’s going on.

Griffin might give Michael’s family a grim prognosis. Sonny (Maurice Benard) will definitely feel powerless as his son suffers. Kiki and Michael are friends, so she may provide some support. She won’t want Avery (Ava and Grace Scarola) to lose another big brother.

Other General Hospital spoilers say Jason (Steve Burton) may need another scheme. He wanted to break Carly (Laura Wright) out of Ferncliff, but the place may be locked down tight. Carly already escaped once, so you’d think they’d have the place pretty secure right now.

Sam (Kelly Monaco) and Curtis (Donnell Turner) will arrive to provide assistance later. They might distract the staff long enough to get Jason and Carly out. Sam will also do some searching while she’s there. She’ll hope to find something useful, so maybe she’ll seek proof that Carly was overmedicated and mistreated. Anything that could prevent Carly’s return there would be a plus.

The week of August 6-10 will deliver some GH shockers as well. Jason will have a meeting with Margaux (Elizabeth Hendrickson), which could mean bad news. Will he be arrested over the Carly drama? Will Jason somehow get away with it and face Margaux’s fury instead? Either way, Margaux will warn Jason about the trouble ahead.

Over with Sonny, he’ll make some bittersweet memories. Since Sonny has so much going on in his life, will he finally put Mike (Max Gail) in a facility? That might be a good reason to get sentimental about a special day. Meanwhile, Scott (Kin Shriner) will try to get through to Dr. Bensch (James DePaiva). He won’t want to use that picture of Griffin and Kiki at trial.

Nevertheless, Dr. Bensch will stand his ground. He’ll undoubtedly push Scott to attack Kiki from a scandalous angle. Elsewhere Kiki will do some last-minute prep while Griffin praises Ava. He’ll think it’s great that she’s so committed to helping her daughter.

Too bad this trial will probably blow everything up! Griffin and Kiki’s hookup will likely be exposed, so don’t miss the chaos that’s in store. We’ll give you updates as other GH details emerge. Stay tuned to the ABC soap and don’t forget to check CDL often for the latest General Hospital spoilers, updates and news.