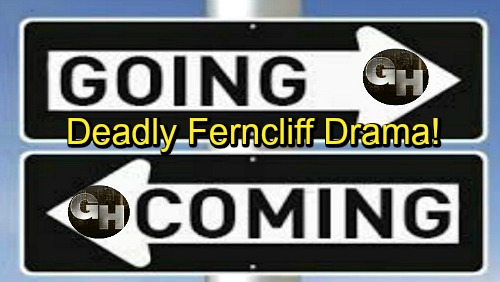 General Hospital (GH) spoilers reveal that we’ve got some comings and goings news to pass along. First, let’s talk about some familiar faces. Allie Leonard appeared as Nurse Brooke Roberts for a couple episodes in July, but she kind of dropped off the map for a while. Fortunately, the actress is reprising her role this month. Nurse Brooke will pop up for at least another appearance or two soon.

Speaking of nurses, a mean one’s set to get back in the mix. General Hospital spoilers say Carly’s (Laura Wright) worst nightmare will return by the end of October. Of course, we’re talking about cruel Mary Pat (Patricia Bethune)! She made Carly miserable during her Ferncliff stint, but Carly was no picnic either if we’re being honest! After all, she did drug Mary Part to make her escape and derail a wedding.

Still, Mary Pat was awfully ruthless during her time on the show. Her next appearances could bring some GH payback. General Hospital spoilers say Mary Pat will be in too deep on October 30. Will she learn the truth about “Kevin’s” special patient? Mary Pat may be the one who finally buys the real Kevin’s story. She might hear Ryan confess or see him do something she shouldn’t.

Mary Pat’s obviously not a nice lady, but she’s not a total monster either. She would probably take pity on Kevin and try to help him out. Naturally, Ryan can’t let her do that. When it comes to causing Port Charles chaos, he’s just getting started! Perhaps Mary Pat’s newfound knowledge will make her Kevin’s first victim.

In other GH news, Katelyn MacMullen recently debuted as Willow Tait. She’s the teacher Liz (Rebecca Herbst) and Franco (Roger Howarth) met with last week. Willow has some concerns about Aiden (Jason David) and his lack of connection. He’s withdrawing from his classmates, so Willow advised Franco and Liz to keep an eye on him. They intend to watch over the boy at home and figure this out.

Willow could be back for more episodes once the problem’s nailed down. Maybe Franco and Liz can work with Ms. Tait to find a solution. That’s it for comings and goings! We’ll give you updates as other GH details emerge. Stay tuned to the ABC soap and don’t forget to check CDL often for the latest General Hospital spoilers, updates and news.