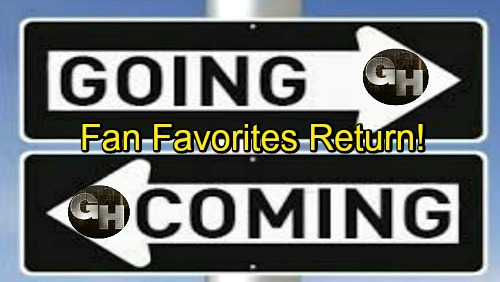 General Hospital (GH) spoilers reveal that we’ve got some comings and goings news to pass along. First, let’s talk about a fan favorite we haven’t seen in a while. Tequan Richmond doesn’t pop up much as TJ, so it’s always a treat when he has new scenes.

Fortunately, TJ will indeed have a chat with Jordan (Vinessa Antoine) on this week’s new GH episodes, July 9-13. She’s probably feeling overwhelmed by wedding preparations, so maybe TJ can pitch in a bit. He’s completely on board with Jordan and Curtis’ (Donnell Turner) fairytale nuptials, but the same can’t be said for Stella (Vinessa Antoine)! She’ll undoubtedly cause more problems as the big event draws near.

Other General Hospital spoilers say Wyatt (Patrick J. Gibbons) will have a few more scenes as well. He’ll make another appearance to fill Franco (Roger Howarth) in on the man trapped at the cabin. Of course, GH fans know that man is Peter (Wes Ramsey). With any luck, Peter’s time in captivity should be winding down.

In other GH news, Leslie Charleson (Monica) has revealed her first day back on set. On Twitter, Charleson let everyone know she’d be heading to work again on July 23. Patty McCormack has been a great stand-in, but many viewers are looking forward to seeing the real deal. Charleson’s Monica has been a soap staple for years, so we’re anxiously awaiting her return.

Plus, General Hospital spoilers say the show’s on the hunt for a new contract actress. According to a recent casting call, they need an African-American woman in her 30s to play “Jessica.” Soap Opera Digest reports that the chosen actress will start shooting in August, so GH fans will look forward to her eventual debut.

Finally, Brytni Sarpy (Valerie) has scored another intriguing role. Since Valerie obviously doesn’t get a lot of airtime these days, Sarpy’s been branching out with some horror films. Her latest SyFy movie is called Karma and it’s sure to bring some scary good scenes! Let’s hope GH can find room for Valerie again down the road.