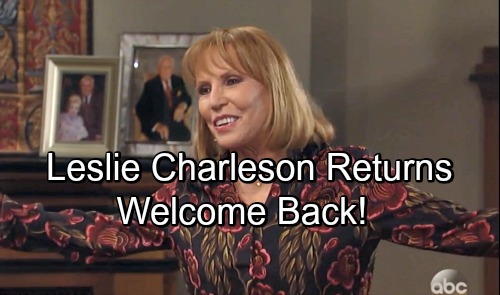 General Hospital (GH) spoilers indicate that Leslie Charleson will be returning to Port Charles as Chief of Staff, Dr. Monica Quartermaine on new GH episodes by mid-August 2018. General Hospital executed an emergency recast in April when Charleson took a tumble and sustained a leg injury while walking her beloved dog, Riley Rose.

Patty McCormack took over the role as Charleson recovered from her injury. McCormack had some big shoes to fill, but she did so effortlessly. McCormack has been acting since the tender age of six and is most known for her role as a fledgling sociopath in the 1956 psychological thriller, Bad Seed.

Since childhood, McCormack has been cast in various stage productions, film, and television. With such a rich acting history, GH fans and castmatees gave McCormack a warm reception. According to Soaps In Depth, Hayley Erin (Kiki Jerome) idolizes McCormack and referred to her as “a legend”. Erin stated “her performance as Rhoda in The Bad Seed literally inspired me to become an actor”.

McCormack has been quite busy on General Hospital as the good doctor. McCormack had to hit the ground running with hot storylines already in motion. Dr. Quartermaine has been a key player to the front burner plots of Nelle’s deception and Kiki’s sexual harassment. Monica hosted Nelle’s babyshower that led to the commitment of Carly Corinthos.

Being the Chief of Staff at General Hospital, Dr. Quartermaine will have to help clean up the mess that dirty Dr. Bensch has created. Dr. Quartermaine has also embraced her role as mother and has been supportive of Drew in his search for belonging.

McCormack has kept the storylines moving while Charleson has been missed. Thankfully, Charleson appears to have recovered fully and is set to return. Charleson has kept fans apprised of her recovery and expressed gratitude for well wishes. Recently, she revealed in a tweet that she will be taping soon – “my first day back to work at GH is July 23rd!”

GH fans will get thier first view of Charleson in August since the soap tapes several weeks in advance. General Hospital fans gladly welcome home Leslie Charleson to the iconic role of Dr. Monica Quartermaine as it looks like the walls may be starting to close in on Dr. Bensch and Nelle.

We’ll give you updates as other GH news comes in. Stay tuned to the ABC soap and don’t forget to check CDL often for the latest General Hospital spoilers, updates, and news.