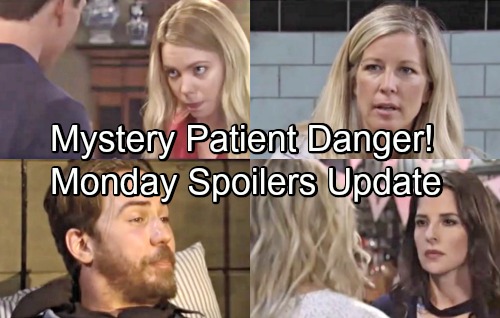 General Hospital (GH) spoilers for Monday, July 2, tease that Jason (Steve Burton) and Sonny (Maurice Benard) will discuss Nelle (Chloe Lanier). The solution Spinelli (Bradford Anderson) mixed up worked like a charm, so they were able to make the ink reappear. Jason will fill Sonny in on the progress, so they’ll hope they can use Nelle’s mistake to help Carly (Laura Wright).

Speaking of Carly, she’ll be suspicious about the man nearby. General Hospital spoilers say Carly will wonder is this mysterious patient is dangerous. She’ll grill Kevin (Jon Lindstrom) about him, but he probably won’t offer any details. Kevin definitely seems to have a few secrets, so this GH storyline is sure to bring some twists and turns.

Meanwhile, Chase (Josh Swickard) will talk to Jordan (Vinessa Antoine) about the past. He’ll admit that his past is tied to Nelle, but now he wants to take her down. Jordan will wonder what Chase needs to make that happen. She’ll be willing to pitch in if it means locking up this sociopath.

Across town, Michael (Chad Duell) will worry that Nelle’s having second thoughts. He’ll sense that she might back out of the wedding, so he’ll do whatever it takes to convince her of his love. Michael will assure Nelle that they’re in this together. He won’t want her to fret about the reactions of the Corinthos clan or the rest of Port Charles. Of course, GH fans know Michael’s still playing Nelle like a fiddle!

Other General Hospital spoilers say Curtis (Donnell Turner) will have updates for Nina (Michelle Stafford). Since Valentin (James Patrick Stuart) didn’t kidnap Peter, Curtis will wonder who did. He’ll go over his questions with a secretive Nina in Monday’s episode, so she’ll really be shaking in her boots.

At Charlie’s Pub, Maxie (Kristen Storms) will also have Peter on her mind. She’ll urge Sam (Kelly Monaco) to reveal any new leads, but it looks like she’ll come up empty. Sam will be curious why Maxie even cares. She assumed Maxie wanted Peter to stay as far away from her as possible.

Maxie may fire back that she wants Peter caught and locked up. However, she probably wants to make sure he’s OK as well. Maxie’s got a good heart, so she can’t just turn her back on Peter entirely. At the cabin, Peter will be stunned by a guest. Will it be a real one or another troubling vision?

Either way, Peter’s not going anywhere just yet. He might as well settle in and accept that. We’ll keep you posted as other GH news comes in. Stay tuned to the ABC soap and don’t forget to check CDL often for the latest General Hospital spoilers, updates and news.