General Hospital Spoilers: Comings and Goings – Nelle’s Back for More Trickery – Britt’s Run Heats up Thanks to Brad’s Secret 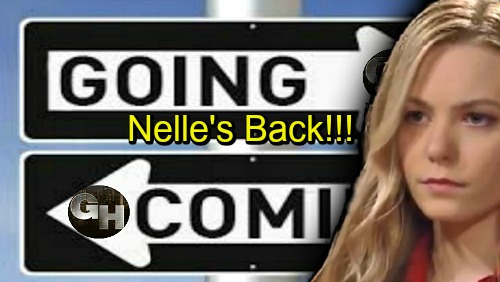 General Hospital (GH) spoilers reveal that we’ve got some comings and goings news to pass along. For starters, let’s talk about the departure everyone’s buzzing about. Patricia Bethune finished off her run as the mean and manipulative Mary Pat (Patricia Bethune). She pushed “Kevin” aka Ryan (Jon Lindstrom) to his limit and became his first murder victim.

It was a memorable Halloween week thanks to Mary Pat’s head in the apple-bobbing barrel and the rest of her in Ava’s (Maura West) gallery. Despite Mary Pat’s horrible personality, she was a fun character to have around. Some GH watchers will miss her in a love-to-hate-her sort of way!

On Twitter, Bethune offered her gratitude to General Hospital and the loyal viewers who have reached out to her. “#uhoh Seems I lost my head…. I #nursemarypat want to thank all #GeneralHospital #GH the cast and crew as well as the fans for all the love. i truly enjoyed being part of your world! it was a brilliant adventure. #grateful @HashtagGrateful #GH55 Darn that Ryan!”

Darn that Ryan is right! He’ll be causing even more chaos in the weeks ahead. In fact, he already made another mess by breaking Laura’s (Genie Francis) heart. Fortunately, Spencer (Nicholas Bechtel) will pop back up to comfort his grandmother on Monday. This kid apparently gets a doozy of a fall break.

General Hospital spoilers say Britt (Kelly Thiebaud) has an episode airing on a new GH episode this week, November 5, too. She’ll be on hand to catch up with Brad (Parry Shen) and learn a startling secret. How much will Brad share? Will he give Britt the full scoop on “Wiley” and the baby switch?

Finally, we’ll see a brief Nelle (Chloe Lanier) sighting. General Hospital spoilers say Nelle will return for some scheming on November 8. She’ll remain behind bars for now, but that doesn’t mean she can’t do more damage. Nelle’s quite the troublemaker, so be prepared for some dirty tricks and added pressure for nervous Brad.