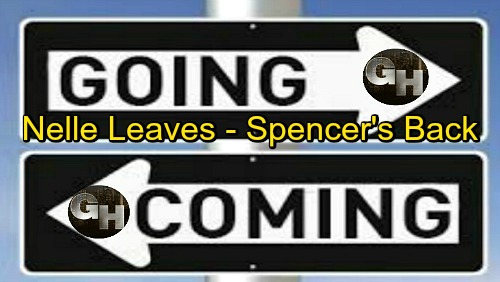 General Hospital (GH) spoilers reveal that we’ve got some comings and goings news to pass along. For starters, Nelle (Chloe Lanier) has one more appearance on the way. She showed up on Friday to kick off her two-day return stint, but she should be hauled back to Pentonville on Monday. Nelle entered a confident not guilty plea as you might expect, but the evidence against her is far too strong.

However, Chloe Lanier is open to more quick stints like this. There’s a good chance Nelle will get some visits behind bars at some point. Of course, Nelle will also have to be part of the baby swap fallout. If two babies are switched, that has to be revealed sooner or later. It’s a soap rule and thankfully there’s no getting around it!

Meanwhile, we can look forward to the return of another familiar face. GH fans know Laura’s (Genie Francis) has been struggling since she returned home. She wants to reconnect with Kevin (Jon Lindstrom), but that’s difficult since her real hubby’s locked up in Ferncliff. Ryan (Jon Lindstrom) is keeping Laura at a distance, so she’ll have to get support from another source this week.

General Hospital spoilers say Spencer (Nicholas Bechtel) will take a trip back to Port Charles. Perhaps he’s already missing his grandmother. Spencer claimed she was starting to cramp his style, but he might’ve had a change of heart by now. Regardless, Spencer will arrive with a bit of an attitude adjustment. He’s a little older and wiser now, so expect a toned-down version of the precocious kid.

In an interview with Soap Opera Digest, Bechtel previewed his character’s comeback. He teased, “Spencer has changed…He’s trying to be a better listener. He’s trying to be respectful of his grandma – and he has a better wardrobe!” Bechtel also admitted he probably played a role in securing this return stint. He confessed to pestering Frank Valentini, GH’s executive producer, until he locked one in.

It’s been a while since we’ve seen Spencer on screen, so Bechtel missed filming. He exclaimed, “It was a nice break, but I was itching to get back to GH!” General Hospital fans won’t want to miss Bechtel’s new scenes, so stay tuned.

That’s it for comings and goings. We’ll give you updates as other GH details emerge. Stick with the ABC soap and don’t forget to check CDL often for the latest General Hospital spoilers, updates and news.