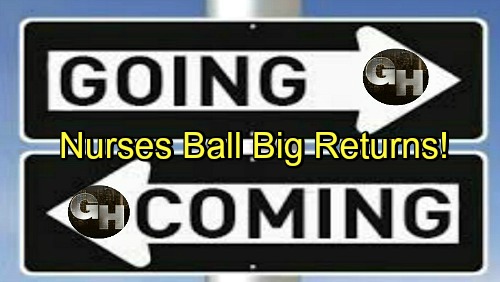 General Hospital (GH) spoilers reveal that we’ve got some comings and goings news to pass along. The Nurses Ball is rapidly approaching, so let’s discuss some fun debuts and returns. For starters, Nick Viall will serve as a red-carpet host. This former Bachelor star will hang out with guests as they arrive and let them show off their glamorous looks. Don’t miss all the stylish partygoers as they head inside!

Carla Hall will also make an appearance for the Nurses Ball kickoff. Nothing’s known about her character yet, but surprises are what make this event so exciting. You might recognize Hall from her other daytime gig. She’s a co-host on ABC’s The Chew, but she’ll join the GH cast for this week’s festivities.

George Pennacchio is an ABC7 reporter and he’ll be playing himself during the Nurses Ball shindig. It sounds like Pennacchio will report on all the buzz, shockers and shakeups. General Hospital spoilers say there’ll be plenty of drama at this gathering, so it’s a good thing a news crew will be on hand to spread the word.

You can catch Viall, Hall and Pennacchio on May 16, which marks the official start of the Nurses Ball. GH fans are already gearing up for the party on social media. Viewers are looking forward to this celebration, which will include several great performances. Josh Swickard’s set to sing as his character, Chase. Since Dante (Dominic Zamprogna) tricked his partner into this, he’s sure to face some backlash.

General Hospital spoilers say some comebacks are brewing as well. Robin (Kimberly McCullough) and Emma (Brooklyn Rae Silzer) will arrive home in time to join the bash, so that’s nice to hear. It’s always a pleasure when Emma and Robin come to town. They’ll spend some time with Anna (Finola Hughes), who’ll be a bit distracted. She’ll definitely struggle to hide her concerns about Heinrik.