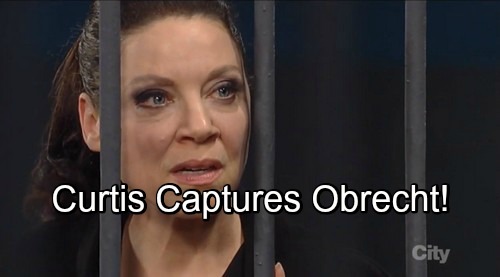 General Hospital (GH) spoilers tease that the jig will soon be up for Liesl Obrecht (Kathleen Gati). She thought she had a foolproof plan for torturing Peter (Wes Ramsey) and getting justice for Nathan (Ryan Paevey). Liesl even roped Nina (Michelle Stafford) into it, so she had some backup along the way.

Of course, any evil soap scheme is destined to fall apart. Sooner or later, the baddie has to get caught! Before Liesl goes down, she’ll wreak a bit more havoc. The blaze she sets at the stables will cause loads of drama. Peter will fear the end is near while Nina goes into full-blown panic mode.

Franco (Roger Howarth) will soon identify Obrecht as his attacker. That’ll send Curtis (Donnell Turner) on a mission to find Dr. O and stop her reign of terror. It won’t be long until he pulls off his goal. General Hospital spoilers say Liesl will flee the scene of the crime. She’ll hope the fire finishes Peter off, but she won’t stick around to be sure of it.

Liesl will probably want to take Franco’s advice and hightail it out of Port Charles. She’d rather make a new life elsewhere than get sent to prison. However, GH fans can expect Liesl’s plan to be foiled. General Hospital spoilers state that Curtis will finally spot her. He’ll catch Obrecht by surprise and insist that it’s all over.

Dr. O will try to resist, but Curtis won’t let her slip away. Once he hauls Liesl to the police station, she’ll be interrogated about her actions. Jordan (Vinessa Antoine) will push for a confession, especially since there’s evidence against her. Liesl may not want to admit defeat at first, but she might break down and spill everything eventually. She might suggest that she’d do it all again if she had the chance.

Is this the end of the road for Obrecht? Will GH lock her up over this or will she find some way to wiggle out of trouble? Even if Liesl goes to prison for a while, you can’t keep a good villain down for long! We’ll give you updates as other news comes in. Stay tuned to the ABC soap and don’t forget to check CDL often for the latest General Hospital spoilers, updates and news.