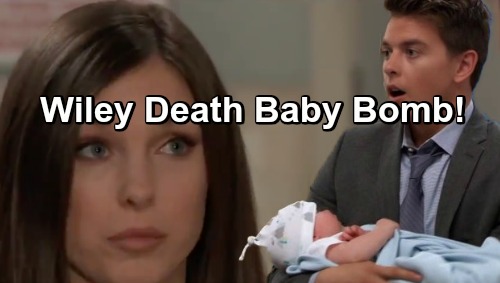 General Hospital (GH) spoilers tease that Willow (Katelyn MacMullen) could become a problem. She recently had a run-in with Julian (William deVry), which led to another conversation later. Willow mentioned how Julian came to her classroom and urged her not to take back “Wiley.” She suggested that if she blabbed about Julian’s actions, she might be able to void the adoption.

Willow ultimately backed off the idea, but she raises an interesting point. She can always keep save that as her last resort if the pain becomes too much to bear. Giving Wiley up was obviously a difficult decision for Willow. This baby seems to be the result of rape or perhaps an ill-advised hookup. There’s some form of sorrow that Willow was hoping to get away from by handing him over.

However, Willow loves kids or else she wouldn’t be a teacher. She nearly took Wiley back before Julian intervened, so she still poses a threat. Willow gazed longingly at “Wiley’s” pictures and wondered if maybe she could be involved in his life. Julian suggested that wasn’t a good idea, but Willow may keep pushing.

If she doesn’t secure visits, Willow might be willing to blab about Julian’s meddling and try to get custody of her son. This situation may become too messy and force Julian to reveal the startling truth – at least the truth as he knows it.

Brad (Parry Shen) divulged only part of the story. He admitted the baby switch, but said mother was some random woman who couldn’t take care of her child.

Of course, this GH baby is far from random! “Wiley’s” is actually Michael (Chad Duell) and Nelle’s (Chloe Lanier) son, so things are about to get interesting. What happens if Willow’s threat becomes too strong? Julian might decide he has no choice but to spill Brad’s tale. He could drop the death bomb and leave Willow even more devastated.

General Hospital spoilers say Willow will begin opening up to Michael soon. If Julian confessed a shocker like that, Willow may pass along the news to Michael and cause trouble. She could put this info in dangerous hands! Michael might confront Brad about the swap and leave the lying adoptive father on the verge of a confession.

Brad may be able to keep his lips sealed, but all of this could still put Michael on a risky path. General Hospital fans won’t want to miss all the baby drama! We’ll give you updates as other GH details emerge. Stay tuned to the ABC soap and don’t forget to check General Hospital spoilers, updates and news.