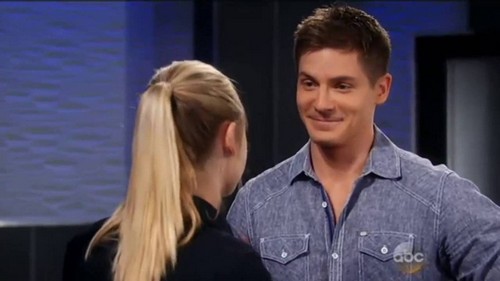 General Hospital (GH) spoilers tease that the ABC soap may need an exit strategy for Kiki (Haley Erin) soon. If you haven’t heard by now, Erin scored a role on a pilot called The Perfectionists. It’s a spinoff of Freeform’s popular drama, Pretty Little Liars. This pilot is fully expected to be picked up by the network, which means Erin may not have much room left in her schedule for GH.

At a recent fan event, Erin claimed she would try to do both shows. However, that just doesn’t seem realistic. Erin probably hated to be a buzzkill during the question and answer session. Maybe she didn’t want to break the news to everyone in that setting. It just wasn’t the time and place to be Debbie Downer.

If we’re going to hear about Erin’s departure from General Hospital, it will likely come in the form of an interview or statement on social media. Of course, the show could just let it play out and surprise everybody with the revelation afterward. That’s what happened with Kristina (Lexi Ainsworth) and Parker (Ashley Jones) were abruptly written out.

Regardless, we should go ahead and prepare for Kiki’s exit. If she leaves as expected, how will GH handle it? There’s one way that would actually bring happiness to many viewers. Losing Kiki would be tough, but GH could use an easy tactic to make it bittersweet.

Could Robert Palmer Watkins reprise his role as Dillon for a “Killon” reunion? Ever since Watkins was fired, he’s been anxious to get back on set. The soap hunk has tweeted that he’s interested in return stints. Plus, Watkins retweeted some info Nathan Varni was passing along not too long ago. He’s apparently still in touch with the ABC exec, so they must be on good terms.

Watkins also retweeted some fun pics from his co-stars during GH’s 14,000th episode celebration. He even quoted a tweet from Frank Valentini, the executive producer of General Hospital, and congratulated everyone on the achievement. It’s clear that he still loves the show and wants to be part of it.

GH could ask Watkins to return and usher Kiki off canvas. It’s worth mentioning that one of his most recent Twitter follows is Celesta DeAstis, the newbie who plays Francesca. Did Watkins meet her on set? You never know! Perhaps Watkins has already been back in Port Charles.

Regardless, it’d be great to give Dillon and Kiki a happy ending. Kiki drunk dialed Dillon on Valentine’s Day, so maybe he’s been thinking about her ever since. He might show up down the road and beg Kiki to take him back.

General Hospital spoilers say Kiki will be feeling pretty low after the rest of this Dr. Bensch (James DePaiva) storyline plays out. He’s abusing his position of power, so things may not go well for her after turning him down. Kiki could really use the support of a remorseful and loving Dillon.

Would you like to see Dillon reunite with Kiki? Will they leave town together? We’ll give you updates as other details emerge. Stay tuned to ABC’s GH and don’t forget to check CDL often for the latest General Hospital spoilers, updates and news.