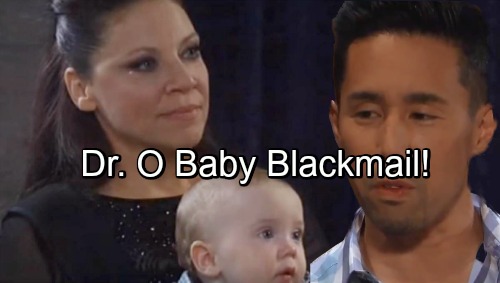 Britt heard all about Nelle (Chloe Lanier) and the baby swap, which could be important later. She suggested that Nelle wouldn’t say anything, so Brad’s in the clear. However, Nelle may not be the one to worry about. Brad doesn’t know there’s somebody else who’s privy to part of the story. We can’t forget that Liesl delivered Nelle’s perfectly healthy baby!

General Hospital spoilers hint that Liesl may fall for Anna, Finn (Michael Easton) and Britt’s trap. Brad’s part of all this as well, so Liesl will feel betrayed from several angles. Her daughter and former accomplice are turning against her. Could Liesl find a way to retaliate or use what she knows as leverage?

It’s possible Liesl will put a few clues together and determine that something’s up. Michael (Chad Duell) thinks his baby was stillborn, but Liesl knows that’s not true. She may be able to pry the whole truth out of Britt or Brad. One of them might admit it under pressure.

Liesl could certainly blab with revenge in mind, but maybe she’ll opt for the power angle. She could use this info to her advantage. Out of loyalty to Brad, Britt might be forced to go back on her word and blow Anna’s plan. She could help Liesl make another break and risk a return trip to prison.

Brad may have to pitch in and make matters worse for himself. He just wants to be a better man and set a good example for “Wiley,” but he’s weaving a tangled web of deception instead. General Hospital spoilers say Dr. O will definitely cause some chaos, so it sounds like more baby drama’s ahead!

Are you looking forward to all the madness? Do you think Liesl’s secret will give her the upper hand and secure another escape? We’ll give you updates as other GH news comes in. Stay tuned to the ABC soap and don’t forget to check CDL often for the latest General Hospital spoilers, updates and news.