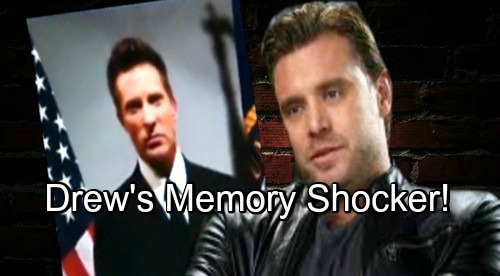 General Hospital (GH) spoilers tease that Drew (Billy Miller) will inevitably get a better grip on his past. Ever since he found out he was Drew Cain and not Jason Morgan (Steve Burton), Drew’s been struggling. He’s still got a brain full of Jason memories and none involving his true history.

Drew considered having Jason’s memories wiped without the flash drive, but ultimately decided not to. He could’ve turned into a vegetable without any memories at all. Drew needs his real ones back and now he’s got the chance to get them. He turned down Margaux’s (Elizabeth Hendrickson) offer, but that flash drive has to end up in Drew’s hands somehow.

Whether Drew changes his mind or Margaux just relents, GH spoilers say Drew should get what he’s seeking. Will Drew actually use the flash drive and try to replace his Jason memories? Drew’s been pushing Oscar (Garren Stitt) to take a risk, so he might as well take one, too.

Andre’s (Anthony Montgomery) had more time to mull over this project, so he may be able to keep Drew’s newer memories intact. He certainly doesn’t want to forget Scout, Jake (Hudson West), Danny (T.K. Weaver), Monica (Leslie Charleson) or Sam (Kelly Monaco). However, General Hospital has offered some warning signs about what Drew might find.

Peter (Wes Ramsey) suggested that there’s no peace in looking backward. Kim (Tamara Braun) provided another potential hint. She commented on Oscar’s stubbornness and how he must’ve gotten it from his dad. Kim surprised Drew by mentioning another court martial that he eventually sorted out. That’s why it didn’t end up on his record.

What else isn’t on Drew’s record? Kim recalls Drew being kind and stoic, but she only knew him for a few months. Plus, she was caught up in a whirlwind romance. Kim wasn’t exactly looking for flaws. If Drew goes through with the memory procedure, he may regret it – at least on some level.