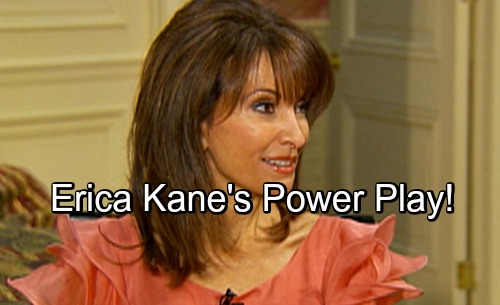 General Hospital (GH) spoilers tease that some exciting possibilities are in the works. Nathan Varni is an ABC exec and he’d love for Susan Lucci to appear on the show. In an interview with ABC Soaps in Depth, Varni hinted that it’d be great to see Erica Kane in Port Charles.

It’s worth noting that Aurora Media needs a new COO. Drew Cain (Billy Miller) fired Peter August (Wes Ramsey), which was to be expected after he was exposed as Heinrik Faison. Could Erica be gunning for Peter’s old job? If so, Drew needs to be careful. Erica might make a power play for the whole company eventually.

Erica certainly has plenty of business experience thanks to her many positions in Pine Valley. Of course, we’re referring to Erica’s lengthy run on All My Children. Erica owned and ran five companies in some capacity. Whether she was partnering up with someone or flying solo, Erica always strived for success.

Erica was also the co-producer of a movie based on her autobiography. Plus, she’s a former model who served as the editor-in-chief of Tempo Magazine. With a resume like that, Erica could fit right in at Aurora. Her talents would be especially helpful at Crimson, although Nina (Michelle Stafford) and Maxie (Kirsten Storms) probably wouldn’t agree!

Since Erica’s known for being ambitious and often ruthless, it’d make sense for her to worm her way into Aurora and stir up trouble. Her history makes her the prime candidate to swoop in for a hostile takeover. Drew seems to be a competent leader, but he definitely missed the signs when it came to Peter’s deception. He could easily miss Erica’s secret plans, too.

Erica may be even sneakier than Peter, so General Hospital could deliver some fantastic drama. The best way to eliminate business competition is to take over the competing companies, so Erica would be awfully motivated. Drew may not know what hit him by the end of all this.

However, GH has to lock in Susan Lucci first. Let’s hope they can make this hot plot happen down the road. General Hospital spoilers say some shockers are looming, so maybe Erica’s arrival will shake things up. We’ll give you updates as other news comes in. Stick with ABC’s GH and don’t forget to check CDL often for the latest General Hospital spoilers, updates and news.