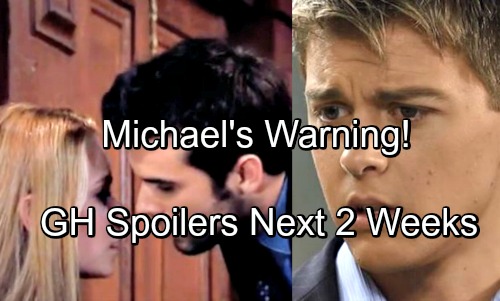 General Hospital (GH) spoilers for the next two weeks tease that the drama will heat up. The week of June 18-22 will bring several exciting encounters. For starters, Jason (Steve Burton) will have a run-in with Kevin (Jon Lindstrom) at Ferncliff. The doc will deliver a serious warning about the risks of this plot.

Kevin will want to make sure Jason knows what’s at stake for Carly (Laura Wright). He may have some advice for Franco (Roger Howarth) this week as well. General Hospital spoilers say Franco will take a moment to chat with his therapist. He hasn’t been in for a session in a while, so Kevin may scold him about that.

However, Franco will insist that things are going great. He’s preparing to marry Liz (Rebecca Herbst), so he’s trying to round up her family. Kevin may have concerns about that. It’s clear that Liz has reservations about summoning the people from her past. Franco keeps going behind her back and that’s never a good thing.

Other GH spoilers say Julian (William deVry) will face an unpleasant task. Alexis (Nancy Lee Grahn) will ask him to go to therapy with her, but he’ll worry about digging up their history. Julian’s trying to move forward with Kim (Tamara Braun), so this could be problematic.

Still, Julian owes this to Alexis after everything he did to her. It appears he’ll attend the session, which should be intense. During the week of June 18-22, Michael (Chad Duell) will be tipped off to trouble. After confronting Chase (Josh Swickard) the previous week, the detective may share a warning.

Chase might suggest that if Michael’s not careful, Nelle (Chloe Lanier) will turn the tables. She can be tricky like that. Later, Chase will make a vow to someone. Will it be Nelle? Perhaps Chase will promise that he’s going to make Nelle pay for what she’s done.

Elsewhere, General Hospital spoilers say Scott (Kin Shriner) will get an irresistible offer. Could Dr. Bensch (James DePaiva) want him as an attorney? Scott would do just about anything for the right price, but this could make major waves with Ava (Maura West).

Over with Jason (Steve Burton), he’ll make an unsettling discovery. It sounds like Carly (Laura Wright) will face another round of harsh treatment. Jason will grow even more determined to free his bestie, so he’ll meet up with Spinelli (Bradford Anderson) again. Unfortunately, Spinelli will struggle to make any real progress in the investigation. His Nelle mission will be stymied, so Jason will start to fret.

General Hospital fans won’t want to miss all the twists and turns ahead. We’ll give you updates as other GH news comes in. Stay tuned to the ABC soap and don’t forget to check CDL often for the latest General Hospital spoilers, updates and news.