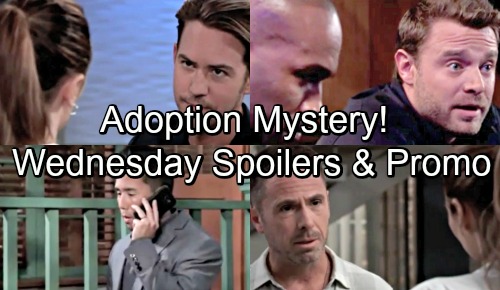 General Hospital (GH) spoilers for Wednesday, August 22, 2018 reveal the people of Port Charles want answers. A heated exchange witnessed as confusion flusters others. A dire warning is issued. Viewers of the ABC soap opera will not want to miss out on tomorrow’s new GH episode, August 22!

GH spoilers show Brad Cooper (Parry Shen) makes a desperate call, demanding to know if they have made any “headway” regarding him and his husband, Dr. Lucas Jones (Ryan Carnes) being able to keep their adopted son, ‘Wiley.’

A meeting of the minds occurs as opposing counsel meet; Alexis Davis (Nancy Lee Grahn) wants to know from Diane Miller (Carolyn Hennesy) why the biological mother has reconsidered the adoption.

Meanwhile, at General Hospital Julian Jerome (William deVry) finds Dr. Kim Nero (Tamara Braun) and it is clear he is hurting for his son, Lucas; saying he doesn’t understand how this can happen.

Fans of General Hosital know Julian’s son-in-law, Brad revealed the majority of the truth to Julian, in hopes he would help him. Could Julian be at the hospital, hoping to convince his lady love to give him the information he needs about the birth mother?

After his meeting with private eye Curtis Ashford (Donnell Turner) proved futile, Drew Cain (Billy Miller) refuses to give up. In fact, GH previews show Drew insisting there is something going on with that woman, and he is going to find out. Will he find any dirt on DA Margaux Dawson (Elizabeth Hendrickson)?

General Hospital spoilers reveal Margaux having a headed exchange with Peter August (Wes Ramsey), telling him she is “off limits.” Is Peter also digging dirt up on Margaux, especially after her repeated visits to his hospital room?

It’s clear to those close to Peter that something is “off” with the man, because Maxie Jones (Kirsten Storms) asks Nina Reeves (Michelle Stafford) what is wrong with Peter.

Sonny Corinthos (Maurice Benard) who has suffered a great deal in his lifetime, can see his son, Michael Corinthos (Chad Duell) is not doing well. Sonny visits Michael and advises him not to make the same mistakes he did; hopefully Michael is of sound mind to listen to his dad’s advice!

Be sure to tune into ABC’s General Hospital (GH) on Wednesday, August 22, 2018 to catch up on everything happening in Port Charles right now. Check CDL General Hospital spoilers often for updates, news, and spoilers!