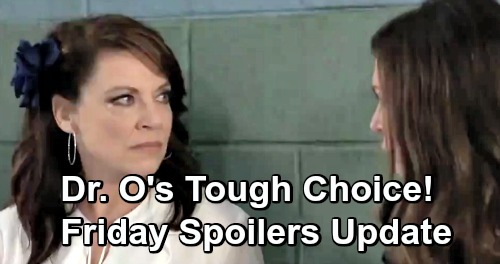 General Hospital (GH) spoilers for Friday, December 7, tease that Jason (Steve Burton) will want to know where Margaux (Elizabeth Hendrickson) stands. Carly (Laura Wright) still seems to think Margaux needs to be handled, but Sonny (Maurice Benard) can tell she’s softening. Margaux’s ready to let go of the painful past and focus on a brighter future.

However, Jason may hope to find out for sure. He’ll hint about Margaux possibly investigating him, so she’ll wonder why Jason thinks she would do that. She’s been targeting Sonny since she came to town, but Jason is part of the package. He’s always right there supporting Sonny, so Margaux would have a reason to go after him – at least the old Margaux would.

Thankfully, the new Margaux is moving on! She’ll even hand the flash drive over to Drew (Billy Miller) next week. In the meantime, Alexis (Nancy Lee Grahn) will get updates on Kristina’s (Lexi Ainsworth) new pals. After Kristina gushes about how much she’s learning and growing, Alexis will want to meet some of these influential friends. She’ll be appreciative of how happy they make her daughter.

Daisy (Kelsey Wang) will show up moments later, so Alexis’ wish will be granted. Unfortunately, Alexis could have some reservations about Daisy and her crew. She may get an odd vibe that tips her off to trouble. General Hospital spoilers suggest that Alexis will battle some doubts, so she may decide to keep an eye on the situation. That’s great news since Kristina has clearly joined a cult!

At GH, Oscar (Garren Stitt) will have to hear his mom out. Kim (Tamara Braun) just won’t take no for an answer and Oscar’s a captive audience in his hospital bed. She may hope to get her regrets off her chest and help Oscar understand that she’s sorry.

Since Oscar’s still got a long way to go in his potential recovery, making amends with Kim would be helpful. Oscar could use all the support he can get. Over with Sam (Kelly Monaco) and Curtis (Donnell Turner), they’ll discuss some new clues. Thanks to Sam’s latest phone call, she may get the name of the mysterious newspaper subscriber. Curtis will be impressed as they continue to dig into this case.

Elsewhere, Stella (Vernee Watson) will comment on the gorgeous flowers Mike’s (Max Gail) holding. She’ll think she’s the intended recipient, but it appears she’ll be wrong about that. Mike mentioned a lovely lady he’s growing closer to at the memory center. Her name’s Yvonne (Janet Hubert) and she also happens to be Marcus’ (Nigel Gibbs) wife.

Once Marcus realizes Mike’s wooing Yvonne, he’ll confront Sonny and demand some changes. Marcus won’t want Mike cozying up to the woman he loves, so he’ll expect Sonny to put a stop to it. When Mike puts up a fight, Sonny will once again be in crisis mode.

Finally, Finn (Michael Easton) and Anna (Finola Hughes) will await Liesl Obrecht’s (Kathleen Gati) decision. They flew to Cuba to pull Liesl into this trap, but will she take the bait? Dr. O suspects they’re trying to trick her, but she’ll worry she might be wrong. Will Liesl take a chance to save Britt’s (Kelly Thiebaud) life? If so, Liesl will explode once she learns she was was indeed duped.