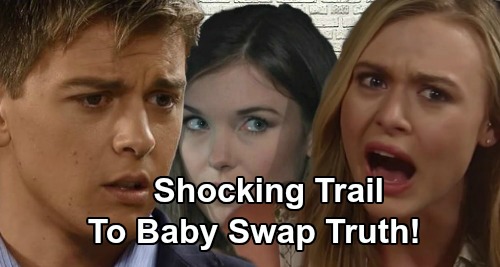 General Hospital (GH) spoilers tease that Michael (Chad Duell) could soon be one step closer to the truth. Ryan’s (Jon Lindstrom) actions could lead to some unexpected consequences for Brad (Parry Shen) and Nelle (Chloe Lanier). Their scheme could be on the verge of exposure thanks to Ryan’s decision to murder Kiki (Hayley Erin).

GH fans know Michael’s had a rough time over the last few months. Jonah’s “death” really hit Michael hard, so he’s struggled to make sense of the loss and move on. Of course, the whole Corinthos clan is haunted by Morgan’s (Bryan Craig) death. When you tack on Kiki’s recent demise, it could be enough to send Michael into a downward spiral.

Fortunately, Michael’s got his bereavement group to help him out. He met Willow (Katelyn MacMullen) and they quickly formed a friendship, but it’s clear that something more could be brewing. General Hospital spoilers say Michael and Willow may begin a romantic relationship. Kiki’s demise could jumpstart it and set the stage for some major revelations.

Michael hasn’t been able to open up in the group meeting so far, but that could change due to his latest loss. Perhaps Michael will be so distraught that he opens up about Kiki, Morgan and of course, Jonah. Since Willow is most likely Wiley’s birth mom, she needs to be brought in the loop on Michael’s “dead” child.

Willow obviously won’t make any kind of connection at that point. It’ll just be a crucial clue that’ll come into play later. Willow might be inspired to share if Michael steps up. If she reveals that she also lost a baby, that could strengthen their bond.

Willow might even admit that she gave her son up for adoption, but he died suddenly that first night with his adoptive father. There’s a good chance Julian (William deVry) told the birth mother that much. Unless he resorted to a threat or bribe, Julian would’ve needed to come clean about the swap. It was probably the only way to keep the birth mom – possibly Willow – from taking a kid that wasn’t hers.

Willow would probably leave out that part, but it might come up eventually with Michael. Since Julian doesn’t know about Nelle’s involvement, that makes all of this even more interesting. Michael will have some gaps to fill in, but the hints should be there. He’ll have to solve a difficult puzzle, but his grief over Kiki’s murder could lead to the first piece.