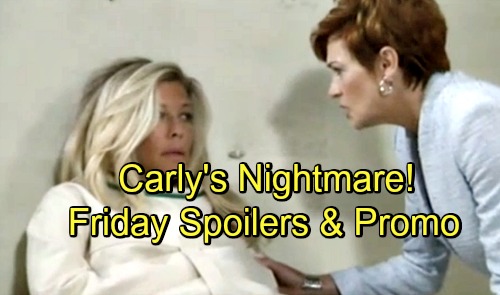 General Hospital (GH) spoilers for Friday, July 20, tease that Nina (Michelle Stafford) will cry out for help at the stables. It looks like she’ll try to drag Peter (Wes Ramsey) out of there and get trapped in the process. As the fire starts to spread, Nina will realize they’re in deep trouble. Thanks to the bogus quarantine, Nina will worry that no one will come to their rescue.

Thankfully, Valentin (James Patrick Stuart) and Maxie (Kirsten Storms) have figured out the truth. Now that Franco (Roger Howarth) has pointed the finger at Liesl (Kathleen Gati), Chase (Josh Swickard) will have to let Valentin go. Finn (Michael Easton) will eventually join him in making the journey to Wyndemere, so that’s good news for Nina and Peter.

Of course, Maxie’s also hoping to catch the launch. Down by the docks, Lulu (Emme Rylan) will wonder why Maxie’s so intent on getting to Spoon Island. Once Maxie spills the Liesl accusations, Lulu will want to pitch in. After a quick trip, they’ll ultimately make it to the site of the blaze as well.

As for Dr. O, she’ll attempt to make her getaway. Liesl won’t get very far once Curtis (Donnell Turner) starts his hunt! In the meantime, Chase will have a warning for Michael (Chad Duell). He’ll insist that if Nelle figures this is a trap, it’s going to make her more dangerous.

Raising Nelle’s suspicions is part of the plan, but Michael still needs to be careful. Chase will remind Michael of what’s at stake and push for precautions. There’s just no room for error here. Nelle will also have a chat with someone on Friday’s new GH episode. Perhaps Chase will wrap up his talk with Michael and head to the Quartermaine mansion.

General Hospital spoilers say Nelle will shut down any murder allegations. She’ll make it clear that she didn’t get away with killing Zach. Lying is as easy as breathing for Nelle, so it’s hard to know the truth. However, Nelle will definitely want to murder Michael. She’ll push Chase to get the job done soon, so stay tuned for major GH drama.

Over with Sonny (Maurice Benard), he’ll open up to Jason (Steve Burton). Sonny recently tried to visit Carly (Laura Wright), but there was nothing Rupert (Patrick Cox) could do for him. Due to Carly’s escape, security’s much tighter. Sonny will fret over the whole situation, but Jason won’t think he should blame himself. When Carly sets her mind to something, there’s no stopping her.

At Ferncliff, Carly will remain drugged up and out of it. Mary Pat (Patricia Bethune) couldn’t rest until “Caroline” was sedated. When Diane (Carolyn Hennesy) arrives, she’ll be appalled by the state they’ve got her in. Poor Carly will mumble about Michael’s wedding as she drifts in and out of consciousness.

Let’s hope Diane can voice her complaints and get Carly some help. We’ll give you updates as other General Hospital details emerge. Stick with ABC’s GH and don’t forget to check CDL often for the latest General Hospital spoilers, updates and news.