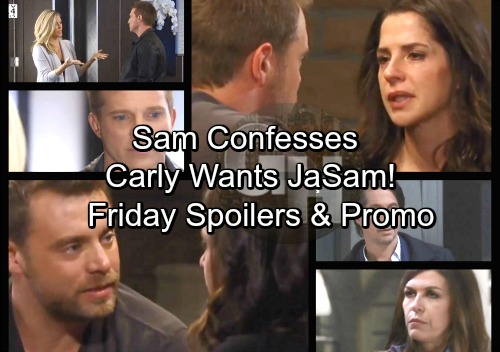 General Hospital (GH) spoilers for Friday, March 23, tease that Sam (Kelly Monaco) will struggle to come clean. She knows she needs to tell Drew (Billy Miller) the truth about her love for Jason (Steve Burton), but it’ll be hard to find the right words. Sam understands how much this is going to sting.

As Sam gets emotional, Drew will realize something must be up. He’ll probably remind Sam that she can tell him anything, but he won’t be prepared for what he’s about to hear. General Hospital spoilers say Sam will admit she she’s in love with two men. She’ll fill Drew in on what happened following the earthquake aftershock, so expect major tension between them. 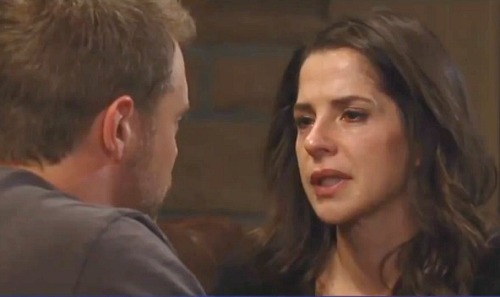 Meanwhile, Carly (Laura Wright) will still be on cloud nine over Michael’s (Chad Duell) decision. Since Nelle’s (Chloe Lanier) living at the Quartermaine mansion, Michael determined that it was time to move out. Carly was ecstatic, but she needs one more thing to achieve true happiness.

During a chat with Jason on Friday, Carly will reveal what else she’s hoping for. She’ll note that all will be right in her world when Sam chooses Jason. Over with Nelle, she’ll await the results of her handiwork. Nelle planted the scarf in Carly’s office, so she’ll look forward to the drama her craft project brings. 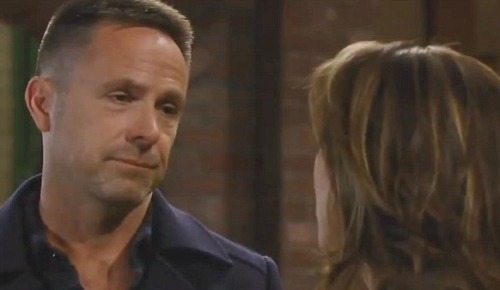 At Kelly’s, Alexis (Nancy Lee Grahn) will continue her lies. She just told Julian (William deVry) that things were getting serious with Finn (Michael Easton), but that’s simply not true. Finn and Alexis agreed to stick to friendship.

Nevertheless, Alexis will fib about how Finn just “does it” for her. Part of Alexis is undoubtedly enjoying Julian’s jealousy. Another part of her probably just thinks this will help him move on. Across town, Anna (Finola Hughes) will try to gather up her courage. She got a little nudge from Andre (Anthony Montgomery), so she may be ready to tell Finn how she feels about him. 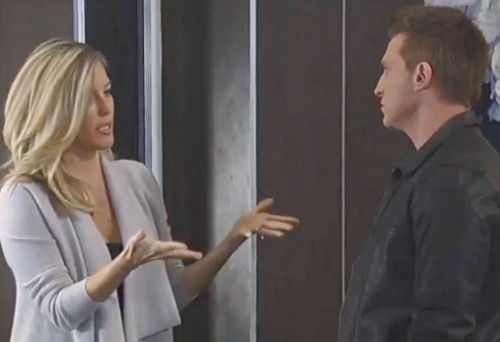 Other General Hospital spoilers state that Mike (Max Gail) will be distraught. He’ll get quite agitated during an argument with Sonny (Maurice Benard). It looks like Sonny will correct his pop on something and it won’t go over well.

When Sonny pushes Mike to calm down, that’ll only make it worse. Mike will rant about Sonny calling him a liar, so this will be another difficult day for both of them. Sonny will also run into Andre in Friday’s episode. GH fans know that Andre was released from prison early, so Sonny will likely object to that. He’ll rip into Andre and stand up for the suffering twins.

Back with Jason, he’ll seek updates from Spinelli (Bradford Anderson). They’ll discuss any new Heinrik leads and hope that this investigation finally gets them somewhere. We’ll keep you posted as other GH news comes in. Stay tuned to the ABC soap and don’t forget to check CDL often for the latest General Hospital spoilers, updates and news.