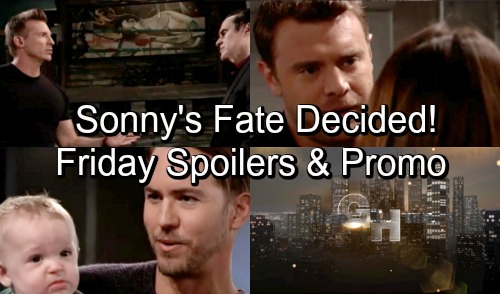 General Hospital (GH) spoilers for Friday, October 19, tease that Michael (Chad Duell) will have a chat with Stella (Vernee Watson). At GH, she’ll fish for info on Michael’s mental state. He’s had a rough time since Jonah’s “death,” so Stella will want to be sure he’s working through his sorrow. It’s important for Michael to tackle his feelings head-on.

Stella will suggest that she doesn’t care how Michael grieves as long as he does. He’ll hope to put Stella’s mind at ease and keep hanging in there. Michael still has some tough days ahead of him, but he won’t want Stella to fret. Meanwhile, Curtis (Donnell Turner) will share a meal with Jordan (Briana Nicole Henry) and TJ (Tequan Richmond). He’ll make a big announcement that shocks them both.

Curtis will declare that the wedding’s off, but he’s probably just messing with them. He may feign outrage over some new arrangements, but there’s no reason to cancel now. Jordan and Curtis found an alternate venue, so the countdown to their nuptials is still on.

Other General Hospital spoilers say Maxie (Kirsten Storms) will grant Peter’s (Wes Ramsey) request. He’s been dying to spend some time with his nephew, so Maxie will hand the kid over. As Peter holds little James, he’ll be on cloud nine. Peter will suggest this is what he’s been missing his whole life. He’s always wanted a family and people to care about.

Over with Margaux (Elizabeth Hendrickson), she’ll wonder what Drew’s (Billy Miller) decision is. Will he turn against Sonny (Maurice Benard) in exchange for the flash drive? Drew will get in Margaux’s face and lash out at her. He won’t know why he hasn’t called the cops on Margaux yet, but she’ll have a pretty good idea. Margaux will argue that it’s because Drew wants his memories back.

General Hospital spoilers say Drew will make his choice, so we’ll see just how much those memories matter to him. Across town, Jason (Steve Burton) and Sonny will work on their latest plan. They’ll talk about how they’re going to show Margaux her father’s dark side. Vincent Marino was no saint, so they need Margaux to truly grasp what kind of man he was.

Sonny and Jason’s scheme sounds like a decent idea, but there’s a chance it’ll go horribly wrong. Margaux could get even angrier if she feels like they’re blaming the victim. Will Sonny take a serious hit soon? We’ll give you updates as other GH news comes in. Stay tuned to the ABC soap and don’t forget to check CDL often for the latest General Hospital spoilers, updates and news.