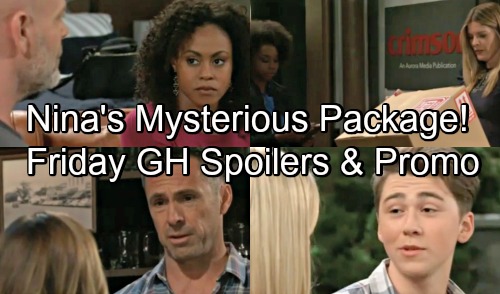 General Hospital (GH) spoilers for Friday, September 7, tease that Josslyn (Eden McCoy) and Oscar (Garren Stitt) will finally make it to their park bench. They’ll enjoy a belated anniversary celebration after Oscar’s release from GH. Oscar will note that there’s still a lot they don’t know about each other. He’ll look forward to finding out more, but he’d better work fast. Time could be running out.

Oscar’s dying, so that’s sure to be a blow to this couple when the truth is revealed. Until then, Oscar and Joss will remain on teen cloud nine. At Crimson, Nina (Michelle Stafford) will receive a mysterious delivery. General Hospital spoilers say Maxie (Kristen Storms) will spot the huge box and wonder who it’s from.

Nina will reply that it’s from her mother’s lawyer. Some secrets could be waiting inside. Madeline lied about Nina’s miscarriage, so her daughter’s seemingly still alive and well. Will Nina get a clue thanks to this delivery? She’ll just have to open it up and find out!

Other General Hospital spoilers say Curtis (Donnell Turner) will have a chat with Carter Buckley. His sentence was reduced, but only because he was sent home to die. Ailing Carter apparently doesn’t have much time left, but he’ll manage to carve out a chunk for Curtis and Jordan (Vinessa Antoine). Curtis will ask what Carter can tell him about Madeline Reeves.

Back in Port Charles, Kristina (Lexi Ainsworth) will take a risk. She’ll apply for a job at Charlie’s Pub, but Julian (William DeVry) won’t see how this is going to work. Kristina’s a pro behind the bar, but her parents will be his main concern. Alexis (Nancy Lee Grahn) could probably deal with it, but Sonny (Maurice Benard)? He’s going to explode!

Julian will point that out to Kristina, but she’ll think she can handle her angry father. She’ll just want to know if she’s got the job or not. Meanwhile, Sam (Kelly Monaco) will sense some trouble. As Drew (Billy Miller) and Jason (Steve Burton) discuss Oscar, Sam will wonder if something happened to him. They’ll explain Oscar’s collapse, but Sam will get the feeling that there’s more to the story.

Elsewhere, Mike (Max Gail) will have the corpse drama on his mind. He’ll tell Sonny that he wants to clean it up for good this time. Mike won’t want Sonny’s mess left hanging over him. Sonny would love to get rid of his problem, but he certainly doesn’t want his father’s help. In Mike’s current condition, he can only make things worse.

General Hospital fans won’t want to miss Friday’s exciting episode. We’ll give you updates as other GH news comes in. Stay tuned to the ABC soap and don’t forget to check CDL often for the latest General Hospital spoilers, updates and news.