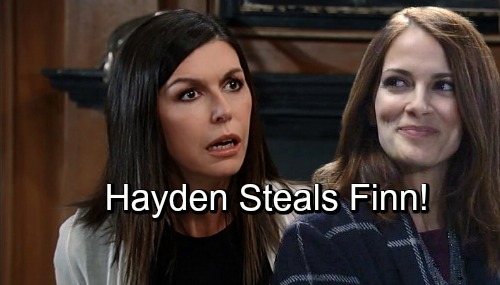 General Hospital (GH) spoilers tease that Anna (Finola Hughes) and Finn (Michael Easton) have some challenges headed their way. GH fans know these two came together through some big adventures. It seems like they’ve gone through mission after mission, so there’s always been something to keep excitement in their romance. Perhaps that’s part of what made their relationship work.

However, this high can only last for so long. Finn and Anna will eventually come crashing down to boring reality. Love can certainly be an adventure in its own, but it’s not quite the same as getting kidnapped, bringing people out of comas, cutting deals with criminals, etc. What happens when Anna and Finn settle in to something average?

Anna’s inevitably going to be pulled into dangerous undertakings from time to time. That’s just how Anna rolls. Finn, on the other hand, is still a doctor at GH. He’s got patients to see and family drama to deal with, so he can’t help out with every single thing.

General Hospital spoilers suggest that after the Britt (Kelly Thiebaud) and Liesl Obrecht (Kathleen Gati) chaos winds down, “Fanna” will take a breather. They’ll see if they can make it without the crutch of thrilling action. Will they find that it’s pure bliss or a little too humdrum? Finn tends to be on the dull side anyway, so he may find that preferable. The situation might be a bit different for Anna.

Of course, lack of missions doesn’t mean lack of story! There’ll be another complication for Finn and Anna to tackle. Next week will set up a new chapter through a shocking message. General Hospital spoilers say Hayden (Rebecca Budig) will get in touch with Finn, so that’ll bring her name back to mind.

It’s possible Hayden will share that their child survived, but GH may save that bombshell instead. It’d have more impact if Hayden just waltzed back into town one day with a kid. This may just be General Hospital’s reminder that Hayden’s still out there. It’s important to jog fans’ memories as well as Finn’s!

Finn still probably won’t have Hayden’s location, but he’ll be thinking of her. Will that affect his relationship with Anna? Could it hang over them like a dark cloud? Between that and other trials they’ll face, trouble could be on the horizon.

Valentin (James Patrick Stuart) may find himself brokenhearted thanks to his Sasha (Sofia Mattsson) scheme. His reunion with Nina (Michelle Stafford) will surely be destroyed. That could open the door to a Valentin and Anna pairing, especially if she ends up brokenhearted, too.

As for Finn, he may pine for Hayden until she returns someday. General Hospital is clearly considering it or else they wouldn’t be throwing in Hayden’s message. Would you like to see Finn and Hayden together again? We’ll give you updates as other GH news comes in. Stay tuned to the ABC soap and don’t forget to check CDL often for the latest General Hospital spoilers, updates and news.