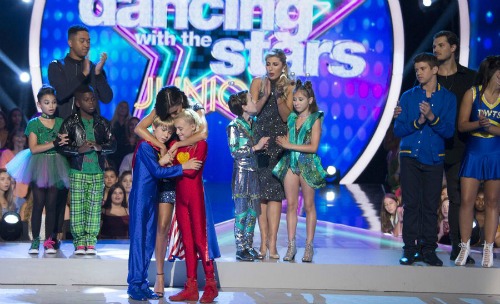 General Hospital (GH) spoilers is saddened to report the surprise elimination of a GH star from “Dancing with the Stars (DWTS): Juniors.” Hudson West, who portrays Jake Spencer on GH, was eliminated from the DWTS lineup on Sunday, October 14.

The elimination happened after all the contestants danced to songs that were released during the year of their birth. Hudson and his dance partner, Kameron Couch, danced a fierce Paso Doble to Madonna’s “4 Minutes” featuring Justin Timberlake and Timbaland. Hudson and Kameron wore superhero costumes during the dance and clearly had a great time.

Hudson’s dance received a score of 7 (out of 10) from two of the judges and an 8 from the third judge, giving him a total score of 22 (out of 30), which was one of higher dance scores of the night. But on DWTS: Juniors, the judges’ scores are combined with the studio audience votes, and in the end Hudson’s combined score was not high enough to prevent his elimination.

Despite his loss, Hudson should be proud of his accomplishments on DWTS: Juniors, and especially on his last dance. The judges’ comments on his dance were positive overall. Judge Adam Rippon stated that he was “so impressed…you guys look like a really great partnership…it’s so fun to watch.” And judge Mandy Moore said, “you embodied the character…I really enjoyed that performance.”

Understandably, though, many GH fans are heartbroken that Hudson won’t be continuing on DWTS: Juniors. Hudson is active on Twitter, and fans have been tweeting to him about their disappointment and how they believe that he shouldn’t have been eliminated, given that his dance scores were so high.

TK Weaver, who portrays Danny Morgan on GH, tweeted a sweet message of support to his costar. TK tweeted “Really glad you had fun but you were robbed tonight!!! Your scores were really high and I’m proud of you friend. See you on set very soon!!”

You can watch Hudson’s dance below – it’s well worth it. Our congratulations go out to Hudson for a job well done! Stay tuned to the ABC soap and don’t forget to check CDL often for the latest General Hospital spoilers, updates, and news.