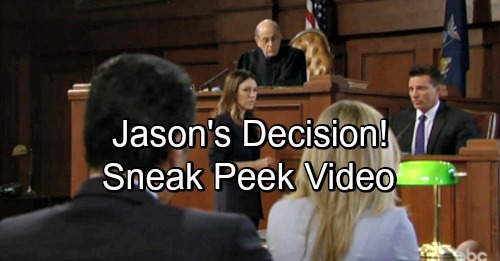 General Hospital (GH) spoilers tease that we’ll see the moment of truth for Jason (Steve Burton) – or should we say the moment of deception? Jason will have to make a terrible choice as Margaux (Elizabeth Hendrickson) revs up the pressure. It’s clear that Margaux doesn’t buy Carly’s insanity claims. She can sense that Jason’s her best chance at honesty, so she’ll hope he can give her the upper hand.

On Friday’s GH episode, Jason took the stand and faced some difficult questions. He’s managed to sidestep most of them with vague, but truthful answers so far. Jason simply focused on the fact that Carly was upset and fragile. That’s as far as he wanted to take his testimony, but Margaux will push for more on Monday. The sneak peek video features major tension in the courtroom.

Jason knows Carly better than just about anyone, so Margaux will think he should be able to evaluate her mental state. She’ll ask if Jason can swear that Carly was insane when she assaulted Nelle (Chloe Lanier). Of course, Jason doesn’t believe Carly assaulted Nelle at all. He’s aware of Nelle’s lies and completely disagrees with Diane’s (Carolyn Hennesy) current strategy.

However, General Hospital fans know Jason is loyal to Carly. He vowed to back her up, so it’s tough to imagine him breaking that promise. Jason could send Carly to prison for 25 years if he blows this for her. He just can’t take the risk, so it looks like honesty is out.

Jason may try once more to wiggle out of his jam. It’s ridiculous for Margaux to pose this question anyway – at least in the way she’s asking it. Jason isn’t a mental health professional. Even if he believed Carly was acting crazy, it’s not his place to swear that she was insane when Nelle tumbled. Jason wasn’t there, so how could he say for sure?

Nevertheless, Margaux and the judge will insist on getting an answer out of Jason. They’re determined to hear his assessment. Bottom line, Jason will most likely be forced to lie. He may reluctantly fib that Carly indeed seemed off her rocker beforehand. It sounds like Jason will go against his own instincts for the sake of his bestie.

General Hospital spoilers say Carly will avoid jail time, but she’ll still be sent to a state facility with tighter security and harsher policies. Jason will work to get Carly out of Ferncliff ASAP, so stay tuned. We’ll give you updates as other GH news comes in. Stick with the ABC soap and don’t forget to check CDL often for the latest General Hospital spoilers, updates and news.