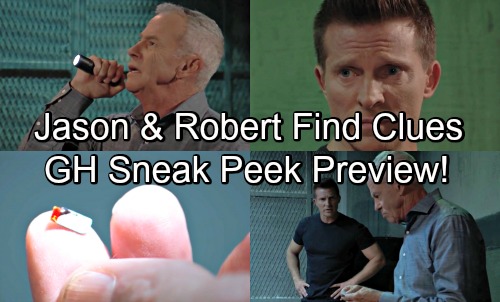 General Hospital (GH) spoilers tease that Robert (Tristan Rogers) will have major concerns about Anna (Finola Hughes) and Finn (Michael Easton). In Monday’s sneak peek video, Robert visits the last location he tracked Finn to. As he looks around with a flashlight, Robert thanks Jason (Steve Burton) for coming through as his backup. He just didn’t have time to wait for bureau reinforcements.

Of course, GH fans know Jason is often on the wrong side of the law. General Hospital spoilers say he’ll admit he was surprised to hear from Robert. Jason has had his fair share of issues with him, but none of their differences will matter. They both care about Anna’s safety, so they’ll come together for this important rescue mission.

General Hospital spoilers say Robert and Jason will do a little more investigating. They’ll look around the room where Finn was last held, but the only sign of him will be the tracker he left behind. Robert will pick it up and put it in a WSB evidence bag for safekeeping. He’ll wonder how Finn’s captors even found it, but GH viewers are in the loop on the real story. It was Anna’s idea to remove it.

Anna feels like they’re closing on the truth about who orchestrated all this. She didn’t want Robert barging in and spoiling things at the last second. However, Robert will suspect trouble. He’ll let Jason know that they can’t underestimate who they’re up against. The situation is dire, so they have to locate Finn and Anna ASAP.

General Hospital spoilers state that Jason will have a couple of good ideas. For starters, he’ll offer Spinelli’s (Bradford Anderson) assistance. Jason will think Spin could hack the private servers and get the security camera footage. He’ll note that they could get a look at the car Anna and Finn were transported in.

Robert will seem interested, but he’ll point out that they can’t make too many assumptions. He won’t know if Anna was even at the same location. That’ll prompt a question from Jason. He’ll ask how sure Robert is that Anna was the target. Jason will suggest that maybe Anna was kidnapped as part of a trap for Finn.

General Hospital spoilers say Finn has indeed been summoned to help a mystery patient. If his efforts don’t pay off, Anna won’t survive! Fortunately, we know Anna won’t suffer a grim fate. Finn will undoubtedly heal the person who requires his treatment, but there’ll be plenty of drama along the way.

It sounds like some startling developments are coming up. We’ll give you updates as other GH news emerges. Stay tuned to the ABC soap and don’t forget to check CDL often for the latest General Hospital spoilers, updates and news.