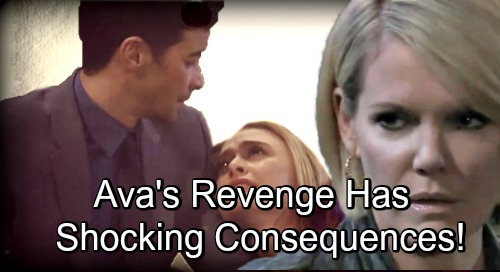 General Hospital (GH) spoilers tease that Griffin (Matt Cohen) and Kiki (Hayley Erin) will face more issues. Since Ava (Maura West) turned Griffin in for ordering an illegal DNA test, Monica (Leslie Charleson) had no choice but to suspend him. Despite Ava’s blow, Griffin’s undoubtedly struggling with the loss of his relationship. He didn’t always show it, but Ava meant a lot to him.

Of course, Kiki’s still got some work drama headed her way. Dr. Bensch (James DePaiva) was fired, but he assured Kiki that their battle isn’t over. He intends to sue GH and Kiki for defamation of character. This guy is creepy and vindictive, so what happens if his plot fails? You can bet Dr. Bensch will have a backup plan.

The doc might cross the line with Kiki sexually since she ruined his reputation. Could Kiki be raped? Most GH fans wouldn’t like that story development, but there’s a chance General Hospital could go for it. They could at least set up the shocker and have Griffin rush in as a hero to prevent it.

Kiki and Griffin also have a mutual problem. Naturally, we’re talking about Ava’s revenge mission. It’s clear that the burned Jerome isn’t done! Griffin knows Ava helped Nelle (Chloe Lanier) take down Carly (Laura Wright), so he’s attempting to keep her in line with that info. However, Ava didn’t seem too scared. It’s not like Griffin can prove anything. The cops couldn’t prosecute Ava without hard evidence.

Ava suggested that Sonny (Maurice Benard) might kill her if Griffin spilled the news, but she won’t let that stop her vengeance scheme. As Kiki and Griffin face this crisis, it could bring them closer together. That should anger Ava and drive her to sabotage their budding romance. Ava doesn’t want Griffin anymore, but she certainly doesn’t want Kiki to live happily ever after with him either.

Nevertheless, Griffin and Kiki will have to reevaluate their friendship. General Hospital spoilers say they’ll assess their growing feelings and wonder if there’s more going on between them. Should they be move beyond just being pals? They could take that leap despite Ava’s vicious acts of protest.

It sounds like Kiki and Griffin will be wrapped up in romantic mayhem this fall. We’ll give you updates as other GH details emerge. Stay tuned to the ABC soap and don’t forget to check CDL often for the latest General Hospital spoilers, updates and news.