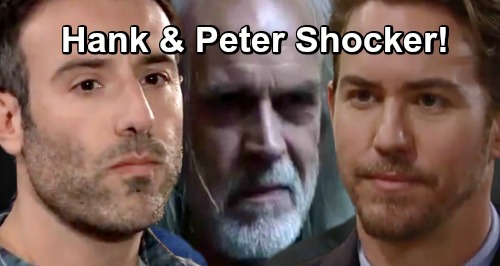 General Hospital (GH) spoilers tease that Hank (Coby Ryan McLaughlin) is holding back some details regarding his history with Drew Cain (Billy Miller). He recently ran into Jason Morgan (Steve Burton) and mistook him for his twin brother.

Of course, that easily could’ve been an act. Jason wasn’t really buying Hank’s whole buddy vibe anyway. This guy seems more like a foe than a friend.

Drew is hesitant to bring more drama to his life when Hank could just be a simple acquaintance, but he can’t pass up a chance to learn about his past. Since Drew currently has no plans to have the memory procedure, he has to take advantage of opportunities like this. They’re the only way to discover more about who he used to be.

Naturally, Drew needs to be careful about what he believes. Hank can’t be trusted, so it’s wise to be wary. We also know that Hank will have another connection or two on canvas. His links in the present will tie in with his links to Drew’s past. Let’s consider where GH might be going with this hot plot.

For starters, Hank is a nickname for Henry. That’s awfully close to Henrik, a German cognate for Henry. General Hospital already revealed Peter August (Wes Ramsey) as Henrik Faison and he recalls his childhood. Valentin Cassadine’s (James Patrick Stuart) knowledge of everything seems to confirm his backstory.

However, just because Peter was raised as Henrik doesn’t mean he was the real Henrik. What if the wrong baby was somehow handed over? “Hank” could be Cesar Faison’s (Anders Hove) true evil heir, which could certainly shake things up. GH would be rewriting history again, but there’s no reason they can’t.

Even if Hank isn’t Henrik himself, he could still be related to Peter or perhaps be tied to the memory-mapping project. He might’ve worked for Peter around the time Jason’s memories were mapped on Drew’s brain. There is also a fair bit of resemblance between Hank and Peter as GH fans have noted.

If that’s the route General Hospital’s taking, why has Hank chosen to surface now? He must have some dark plan to pull off, so several lives are about to get complicated.