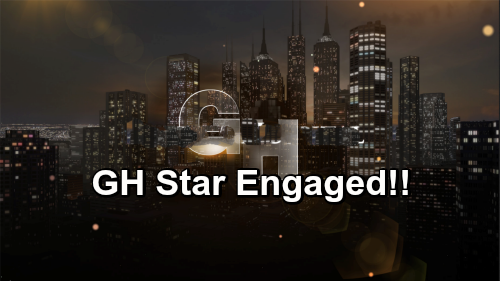 General Hospital (GH) spoilers has some exciting news to pass along about a popular GH star. Josh Swickard, who portrays Detective Harrison Chase on the ABC soap, has announced his engagement to girlfriend and now fiancee Lorynn York.

Josh posted two photos on Instagram of himself and Lorynn at Beaver Creek Mountain resort in the Rocky Mountains. The two look very happy in the pictures and Lorynn is showing off her new engagement ring. Josh’s caption reads: “I have always had a hard time posting about my private life. However I can’t keep this to myself, I just asked this beautiful girl to spend the rest of her life with me. @lorynnyork I love you so much and I can’t wait to grow old with you.”

Josh’s new finance Lorynn also posted the photos on her own Instagram feed along with the following caption: “Introducing my future HUSBAND! @joshswikard. I am the luckiest girl on this planet!!!! Never have I experienced a friendship so wonderful, a love so deep, and a life so full of JOY until I met this man. Here’s to forever baby! Thank you Lord for creating the most incredible person for me. I AM SO HAPPY. #fiance.”

Both posts have received an outpouring of support and congratulations from Josh’s and Lorynn’s followers. Most of their followers are very enthusiastic about the news and wish the happy couple their best.

If Lorynn looks familiar to you, it’s because she’s also an actor as well as an accomplished ballerina. She has appeared in the movie Rosemont, as well as several television series, such as Anatomy of Violence, The Neighbors, and SyFy’s Lava 2 Lantula.

We offer Josh and Lorynn our congratulations and wish them the best! Stay tuned to the ABC soap and don’t forget to check CDL often for the latest General Hospital spoilers, updates, and news.

I have always had a hard time posting about my private life. However I can’t keep this to myself, l just asked this beautiful girl to spend the rest of her life with me. @lorynnyork I love you so much and I can’t wait to grow old with you.

I’ve never been happier in my life 💍