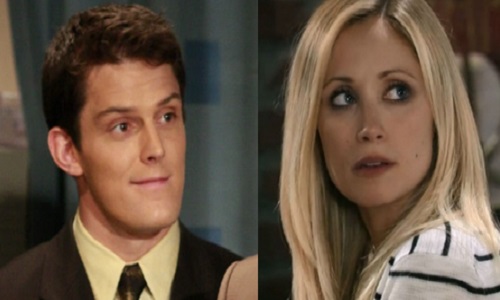 General Hospital (GH) spoilers tease that hearts will keep breaking on the ABC soap. Lulu (Emme Rylan) was devastated by Dante’s (Dominic Zamprogna) decision to take that WSB assignment. She understood his reasons, but that didn’t make it any easier to say goodbye. Lulu will hope for Dante’s safe return, but that won’t happen without a recast or Zamprogna’s comeback.

Now another Port Charles resident’s about to battle heartache. General Hospital spoilers state that an emotional Milo (Drew Cheetwood) will turn to Sonny (Maurice Benard) for comfort, so it’s possible Epiphany (Sonya Eddy) dumped him. Even if Milo’s coping with something else, he’ll still be distraught and vulnerable. Milo will deal with the same feelings as Lulu, so GH could easily push them together.

GH fans may recall that Milo’s had a thing for Lulu ever since 2006, when he first came to town and did protection detail for her. Then in 2013, Lulu faced a rough patch with Dante and moved in with Milo. It wasn’t long until things took a romantic turn, but Milo quickly pumped the brakes.

If General Hospital moves them back in each other’s orbit, we could see some fireworks. Milo and Lulu might really go for it this time. Perhaps they could serve as confidants and shoulders to cry on. Both of them could use some extra support at the moment. That renewed friendship could build to a hot romance eventually.

Of course, Dante’s out there doing important undercover work and seeking justice. It’s not like he left Lulu for another woman or some other selfish motive. That means it could take a while for Lulu to move on. Still, she could start to see this abandonment if Dante’s gone too long. General Hospital can’t leave Lulu stuck in limbo forever, so they’ll have to find some sort of solution.

Will Milo and Lulu sizzle down the road? Could their feelings grow and turn into deep love? GH is always full of surprises, so you never know what pairing might be coming up next. We’ll give you updates as other news comes in. Stay tuned to the ABC soap and don’t forget to check CDL often for the latest General Hospital spoilers, updates and news.