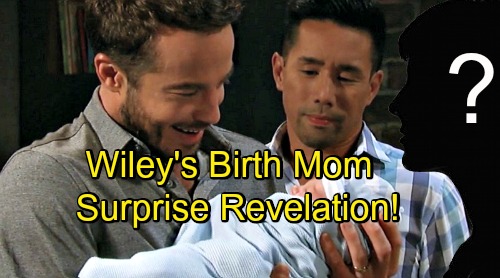 General Hospital spoilers report that speculation about Wiley’s mom has been going on for months amongst GH fans. GH spoilers predicted that Brad (Parry Shen) and Lucas (Ryan Carnes) would somehow end up with Nelle’s (Chloe Lanier) baby. However, who is Wiley’s mom?

One of the most outrageous, not to mention impossible ideas is Emma (Brooklyn Rae Silzer). Some fans are speculating that Emma has been SORASed and is the birth mom. Let’s look at this logically. Robert (Tristan Rogers) just spoke to Robin (Kimberly McCullough) two weeks ago. Surely Robin would have informed Robert if her daughter had run away.

If Emma had gotten pregnant and ran away, she would have come to Anna (Finola Hughes), Mac (John J. York), Felicia (Kristina Wagner), or Robert. This has to be the most illogical idea out there.

Some GH fans think that Francesca (Celest DeAstis) was pregnant with Bensch’s (James DePaiva) baby. Nelle was showing quite a bit when she met Francesca. Francesca would have been just as far along as Nelle. Francesca met with Alexis (Nancy Lee Grahn) on Kiki’s (Hayley Erin) sexual harassment case. Never at any point did Francesca look close to being pregnant.

Another laughable option really. Who would Amy’s (Risa Dorkin) baby’s father be? Never have we seen Amy date anyone. We have not seen Amy look pregnant at all. Amy performed at the Nurse’s ball. A pregnant nurse would be hard to miss at the hospital. Amy loves her family, why would she give away her child?

Kristina (Lexi Ainsworth) comes back to town. Fans jump to the conclusion that she’ s the mom. Kristina is here for her brother, nothing more. Kristina left town with a woman. The last man Kristina was with was in 2016.

IVF and artificial insemination have been suggested. Why is the world spend money on that and give the kid away? Diane (Carolyn Hennesy) and Alexis are friends, she would not handle the case if it were Kristina’s.

Kristina and Parker are having issues. Kristina has the means to raise the child herself. Kristina would not keep that secret from Sam (Kelly Monaco) and Molly (Haley Pullos). Alexis, Sam or Sonny (Maurice Benard) would raise that child. It makes no sense whatsoever for Kristina to be that baby’s mother.

An Interesting Take On The Situation

Let’s look at an equally crazy but plausible idea. Maxie’s (Kirsten Storms) baby was born prematurely. Maxie was not with James all the time. Maxie had a heart condition as a child. Maxie needed a heart transplant. So what if Liesl (Kathleen Gati) found out that James had a heart condition and hired someone to switch the babies so that Maxie took home a healthy baby and Brad got a sickly one. Liesl hates Brad so she could easily do this to him.