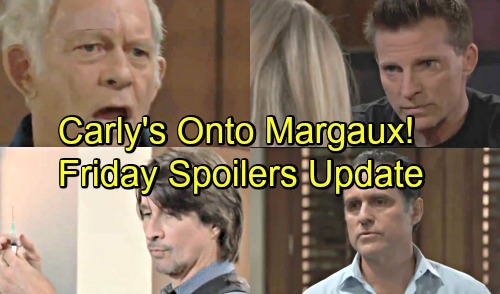 General Hospital spoilers for Friday, August 24, tease that Chase (Josh Swickard) will continue to frustrate Robert (Tristan Rogers) in his role as the PCPD’s new liason to the WSB. Robert’s not exactly thrilled with Jordan’s (Vinessa Antoine) decision to let Chase help with the search for Anna (Finola Hughes) and Finn (Michael Easton).

Chase will ask Robert to let him help before it’s too late, so hopefully Robert will come around and the two men can get on task.

Meanwhile, Finn will mix up another round of drugs for Cassandra (Jessica Tuck), who’s still bedridden but conscious. Cassandra’s only awake because of the drugs Finn previously injected her with.

Anna will ask Cassandra whether she’s going to cooperate with them (and play dead in front of their captors), or go back into an unconscious state. What will Cassandra decide?

Next, on the new GH episode Friday, August 24, Griffin (Matt Cohen) and Ava (Maura West) will have tense words. The two have been at odds ever since Griffin admitted during Kiki’s (Hayley Erin) trial that he and Kiki had sex. It seems that time hasn’t eased Ava’s pain any, as she tells Griffin that she wants him to hurt as much as she does. Yikes.

Drew (Billy Miller) and Margeaux (Elizabeth Hendrickson) also have words on Friday’s episode as they enjoy a date together at The Floating Rib. Margeaux will ask Drew whether it’s so difficult to believe that she just wants to get to know him.

Meanwhile, across the bar, Carly (Laura Wright) will warn Jason (Steve Burton) about Margeaux, stating that she’s just looking for evidence to use against him.

General Hospital spoilers say Sonny (Maurice Benard) and Felix (Marc Samuel) will have a chat about Mike (Max Gail) and his Alzheimer’s situation.

Felix tells Sonny that “when the time comes, you’ll know what to do for your dad.” Meanwhile, Mike is shown alone in the house and looking fearful, and yells out “is someone there?” In conjunction with the weekly GH video below we can discern that Mike is going to have a terrifying episode.

It sounds like Friday’s episode is full of action and drama! We’ll give you updates as General Hospital news comes in. Stick with the ABC soap and don’t forget to check CDL often for the latest General Hospital spoilers, updates, and news.