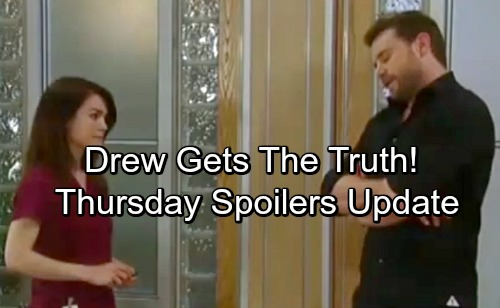 General Hospital (GH) spoilers for Thursday, April 19, tease that Drew (Billy Miller) will check in with Liz (Rebecca Herbst). He’ll spot her at GH and bring up Franco’s (Roger Howarth) recent ordeal. Jim Harvey’s (Greg Evigan) abuse was finally exposed and Franco nearly died in their last faceoff. Drew saved Franco’s life, but he knows there’s still a battle to be won. Franco must conquer his past.

It looks like Franco will keep working on that in Thursday’s episode. General Hospital spoilers say Franco will blast somebody over his or her lies. Based on GH’s preview video, it appears Kevin (Jon Lindstrom) will be on the receiving end Franco’s outburst. That means Kevin’s “lies” may not be lies at all. He could simply be telling Franco something he doesn’t want to hear. 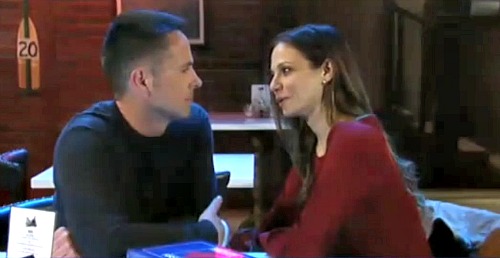 Nevertheless, it’s great that Franco’s trying to get a grip on what happened. He needs to sort through his issues and start focusing on what’s ahead. Thursday could bring a step in the right direction. At Charlie’s, Julian (William deVry) will wonder if Kim (Tamara Braun) has somewhere better to be. He may not be convinced that Kim’s done with Drew.

Kim doesn’t really want to concentrate on the past or future. She’s content to live in the moment with Julian, so she’ll let him know she’s not looking for a change. Kim and Julian have gone over this before, but GH probably wants to hit the topic several times. It’s a good setup for when Drew and Kim inevitably grow closer. 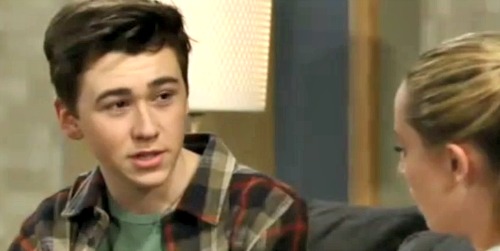 Across town, Oscar (Garren Stitt) will console an anxious Josslyn (Eden McCoy). Avery (Ava and Grace Scarola) and Mike (Max Gail) will still be missing, so Joss and her family will remain worried sick. Oscar will hate that there isn’t much he can do, but comfort may mean more than he realizes.

Over with Sonny (Maurice Benard), he’ll have to tackle Chase’s (Josh Swickard) suspicions. Sonny’s desperate to find Mike and Avery, but he can’t let his guard down when it comes to what he’s hiding. If Chase finds out about the “field in Croton,” it could have disastrous consequences. Sonny will manage to keep that secret for now, but Chase is clearly far too curious. 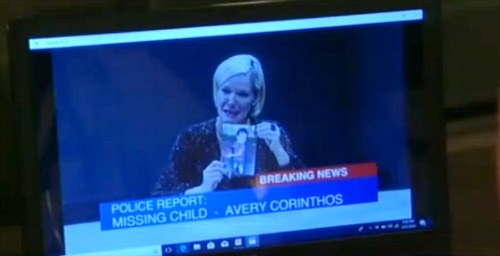 Other General Hospital spoilers say Ava (Maura West) will take make an emotional appeal. A television station will cover the story about Avery’s disappearance. Ava will go live and beg for Avery’s safe return. She’ll urge everyone to take a look at Avery’s photo and call the tip line if they see or hear anything at all. Ava will have a bit of a meltdown, but that’ll just make people more inclined to help. 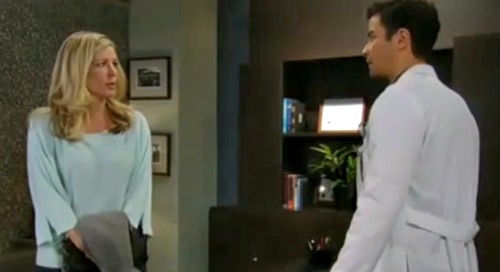 Back at GH, Griffin (Matt Cohen) will want to discuss Carly’s (Laura Wright) test results. There were no red flags physically, but Griffin can’t rule out mental problems. He’ll want Carly to sit down with Kevin soon and try to get to the bottom of all this.

It sounds like Nelle’s (Chloe Lanier) plan is paying off! We’ll give you updates as other GH news comes in. Stay tuned to the ABC soap and don’t forget to check CDL often for the latest General Hospital spoilers, updates and news.