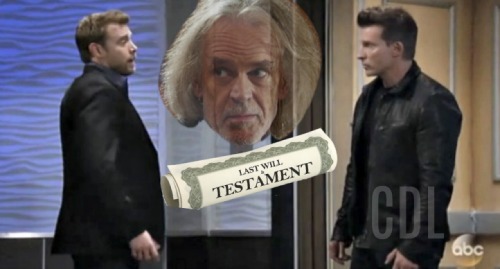 General Hospital (GH) spoilers tease that Drew (Billy Miller) will continue to deal with deep pain and intense anger. For some reason, Drew seems to think Jason’s (Steve Burton) to blame for all his problems. He acts like Jason was enjoying some spa getaway for five years and suddenly decided to steal Sam (Kelly Monaco).

In reality, Jason was being pumped full of horse tranquilizers and kept at a clinic against his will. It wasn’t his choice to leave Sam behind. Jason didn’t even fight for Sam when he came home. He was more than willing to step aside and let Sam choose Drew.

Of course, Drew isn’t guilty in any of this either. He fully believed he was Jason, so his “reunion” with Sam felt right. Still, he’s been far less understanding from the get-go. Before the truth about Jason’s identity came out, Drew threatened to kill him several times. Now that he’s lost Sam, that same old rage is bubbling up.

Kim (Tamara Braun) also revealed that Drew had a real temper during their time together. She suggested that he could fly off the handle at a moment’s notice. That seems to line up with Drew now as well. He can become The Incredible Hulk under the right circumstances.

General Hospital spoilers hint that Sam and Jason will reunite sooner or later. It’s pretty much inevitable now that Drew and Sam have split. Once Jason gets the girl, that should enrage Drew even more. GH fans can see that Drew is capable of spiraling out of control. How bad will things get once he feels like all hope is lost?

That’s where Faison’s (Anders Hove) will could come back into play. General Hospital set up an interesting storyline, so they need to take advantage of it. Faison’s will stipulated that Jason would only get Heinrik info if Drew died. Likewise, Jason’s death might be the only way Drew can get his memories back.

Sam seemed a bit nervous about what Drew might do. She wanted to make sure he knew he couldn’t kill Jason. Drew offered reassurance, but all bets may be off after Jason ends up with Sam. If Drew’s rage becomes too much to bear, could he actually resort to attempted murder?

Jason is sticking around, so we know Drew wouldn’t succeed. Still, this would be crossing a huge line. If Drew even considers it, there could be more to the story of his past. Drew may have to deal with some violent tendencies and hopefully get a grip on his fury.

Do you think Drew’s headed for some type of breakdown? Could he try to kill Jason in a fit of rage? We’ll give you updates as other GH news comes in. Stay tuned to the ABC soap and don’t forget to check CDL often for the latest General Hospital spoilers, updates and news.