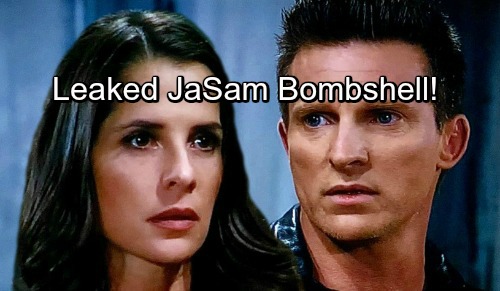 General Hospital (GH) spoilers tease that the ABC soap’s hottest love triangle is getting even hotter. Sam (Kelly Monaco) broke Drew’s (Billy Miller) heart when she confessed her love for Jason (Steve Burton). It’s not clear what Sam expected from Drew, but she certainly seemed surprised and devastated by his decision to walk away.

However, Drew made the right call. Sam still has feelings for Drew as well, but he just can’t be with her if he has to share her love. It’s best for Drew to walk away and let Sam deal with this on her own. He’s hitting the reset button and giving Sam the chance to figure out the path she wants to take.

Of course, Drew may not like the path Sam ends up choosing. It seems likely that she’ll pick Jason soon enough. That doesn’t mean Sam and Jason’s love will last forever, but it does mean “JaSam” fans will be on cloud nine for a while.

Thanks to Bradford Anderson (Spinelli), we have some hints about where the storyline is headed. In Anderson’s Facebook live chat, someone could be heard giving directions over the GH sound system. She alluded to scenes being filmed in Sam’s hotel room and noted that Jason was in there with her.

That’s obviously a big deal for supporters of this popular duo. General Hospital spoilers say Jason and Sam have some sexy moments coming up. Let’s consider how this might play out. Drew left Sam, but she may not be too keen on staying in their home all alone. It may remind her of how much she hates to lose him.

Sam may check in and try to sort out her problems without the weight of her surroundings. Despite how much she’ll miss Drew, Sam probably won’t be able to resist some Jason lovin’. He’ll undoubtedly be popping in quite often. Jason could easily spend far more time in Sam’s suite than he does in his own apartment. He might as well move in there at some point.

Naturally, that could lead to many sex sessions and growing love. Are you looking forward to this “JaSam” reunion? How long will they stick together? Can Sam handle her guilt and longing for Drew? We’ll give you updates as other General Hospital news comes in. Stay tuned to ABC’s GH and don’t forget to check CDL often for the latest General Hospital spoilers, updates and news.