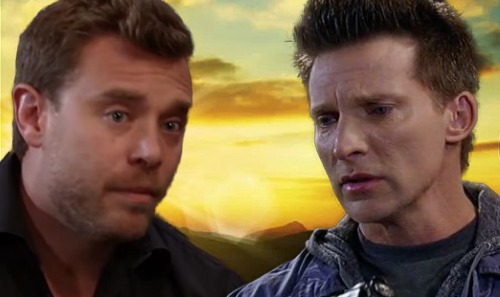 General Hospital (GH) spoilers tease that Jason (Steve Burton) will do his best to help Oscar (Garren Stitt). The guys shared a nice moment, which concluded with Jason asking Oscar to ride on his motorcycle. Oscar grinned from ear to ear, but that smile quickly faded. He suddenly keeled over and suffered a serious seizure, so the situation is obviously dire.

Jason rushed to Oscar’s side and tried to keep a cool head. When the drama picks back up next week, Jason will undoubtedly call for assistance and stay there with the teen. He doesn’t know Oscar very well, but he’s always willing to help someone in need. That’s especially true when that someone matters to Josslyn (Eden McCoy). She should be a nervous wreck when she hears what happened.

Of course, General Hospital spoilers say this will lead to some exciting developments. Oscar clearly has a medical issue of some kind, so that’s one area that GH can explore. It could also bring some revelations in Kim’s (Tamara Braun) past. It’s possible she’s been hiding Oscar’s condition from him.

There’s even been some buzz about Oscar not being Kim’s biological child. If that’s the case, the medical issue could be the catalyst to exposing that. Some shockers will definitely come out of this mess, but some good can come from it, too. For starters, Josslyn may realize just how much Oscar means to her. She’s been rather rude to her beau lately, but this could help them patch things up.

Plus, this may serve as another way to bring Jason and Drew (Billy Miller) together. Jason will be there for Oscar during this terrible crisis. That should touch Drew on some level and potentially bring the brothers closer. Jason will really step up for his nephew, so Drew should express his gratitude.

Drew and Jason’s hostility has already been dying down lately. They bonded over Jake (Hudson West) after the baseball game was canceled. Jason also warned Drew that Margaux (Elizabeth Hendrickson) was up to something. He’s at least making an effort to be helpful to his twin.

Thanks to this ordeal with Oscar, Drew and Jason could form a deeper connection. Is this the start of them becoming a real family? Will they begin acting like true brothers down the road? General Hospital spoilers say changes are brewing, so we’ll give you updates as other news comes in. Stick with ABC’s GH and don’t forget to check CDL often for the latest General Hospital spoilers, updates and news.