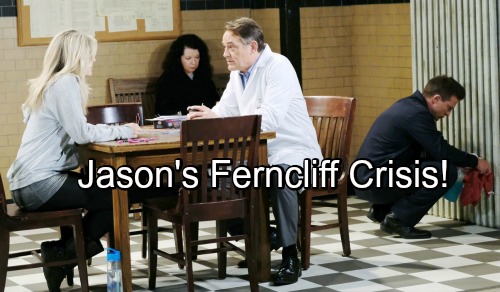 General Hospital (GH) spoilers tease that Jason (Steve Burton) will lurk at Ferncliff and try to support Carly (Laura Wright). He recently got a janitor job there, so he’ll be able to watch out for his pal. Of course, this whole plan comes with plenty of risks. Jason will realize he needs to avoid getting caught, but that’s going to be tough with observant Mary Pat (Patricia Bethune) roaming around.

However, someone else will get the scoop first. General Hospital spoilers say Jason will have a close call that involves Kevin (Jon Lindstrom). Perhaps Jason will nearly face exposure with Mary Pat or another staff member. He may be talking to Carly when somebody heads toward them. Kevin might be able to hide their connection just in time. He could cover for Jason, but he’ll also offer a lecture.

It’s clear that Mary Pat intends to make life difficult for Carly. Things could get far worse if Jason’s exposed as her friend. Mary Pat isn’t the kind of gal who likes to be duped. She wouldn’t appreciate Jason handing over a false resume, especially since he’s trying to help one of her least favorite patients. Furthermore, Jason could land behind bars for fibbing to a government-run facility.

Kevin will remind Jason of all that and wonder what he thinks he’s doing. He’ll attempt to talk some sense into Jason, but it won’t do any good. Despite the support Kevin’s offering Carly, Jason wants to stay close. He’ll insist on sticking around, so let’s hope Kevin can keep concealing this GH scheme.

General Hospital spoilers say Kevin will warn Jason to proceed with caution and try not to blow it. Later, Kevin will work on getting Carly’s meds reduced and getting her out of the supermax wing. Carly doesn’t need to be locked up with the truly violent crazies. The sooner they get her to a safer area, the better off she’ll be.

On the outside, Michael (Chad Duell) will move forward with his Nelle (Chloe Lanier) takedown mission. Some real curveballs are headed his way, but he’ll hope he can secure Carly’s freedom eventually. We’ll give you updates as other GH news comes in. Stay tuned to the ABC soap and don’t forget to check CDL often for the latest General Hospital spoilers, updates and news.